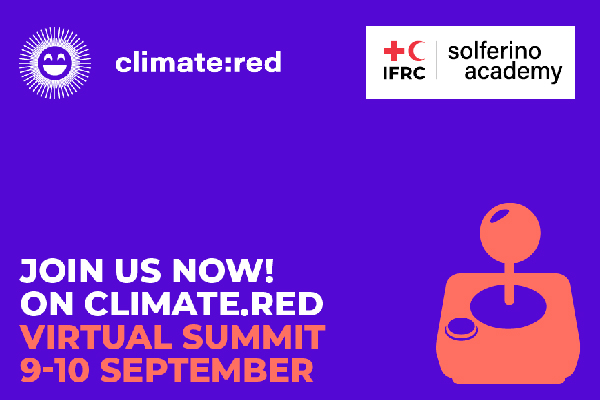 (This story is an IFRC press release issued yesterday in Geneva. It has been edited here for time references)

The summit has been organized by the IFRC to mobilize support for climate action, and encourage the sharing of ideas and experiences. The event will run for 30 consecutive hours to allow people in all time zones to get involved, and is open for everyone to join.

IFRC President Francesco Rocca said: “While the world’s attention has been turned to Covid-19, the climate crisis continues to unfold. Climate change is already a humanitarian crisis, and the scale of the suffering it causes will only get worse.

“The Red Cross and Red Crescent is committed to massively scaling up our climate action, and this summit will mobilize our global network to meet those commitments.

“Climate:Red is also an opportunity to engage with and inspire an enormous network of change agents.”

Climate:Red has a crowdsourced programme with around 200 sessions and speakers. In addition to leadership, staff and volunteers from the Red Cross and Red Crescent network, the summit will feature leading scientists, government ministers, CEOs, youth champions, climate activists and people in remote communities driving climate change initiatives every day.

For instance, there will be a round-table discussion with indigenous leaders from around the world, messages from young Red Cross and Red Crescent climate champions, an ignite talk about the role of art in raising awareness about climate change in Sudan, and a variety of interactive panels, workshops, virtual games and live podcasts.

During the event, the shortlisted candidates of the Climate:Red innovation competition will pitch their ideas and new ventures to address climate change in the Innovation Pitch Tent open on Thursday at 13:30 CEST.

The audience can vote for their favourite, and competition winners will receive funding to help implement their ideas.

The summit is open to all members of the public, and all of the main stage sessions at Climate:Red will be available in English, French, Arabic and Spanish.

IFRC Secretary General Jagan Chapagain said: “We always envisaged Climate:Red summit as our first fully virtual global event, and I hope as many people as possible will take the opportunity to join the summit across its 30 hours of ideas and inspiration.

“Climate change affects us all, no matter who we are or where we’re living. We need to talk to each other, and support each other, if we are to rise to the many challenges and overcome them.

“Climate:Red will help us do this by creating a space for learning, sharing, exploring and strategizing on how we can scale up our climate action.”

The Climate:Red summit is open to the public and its sessions at will be available in English, French, Arabic and Spanish. (Image: IFRC)