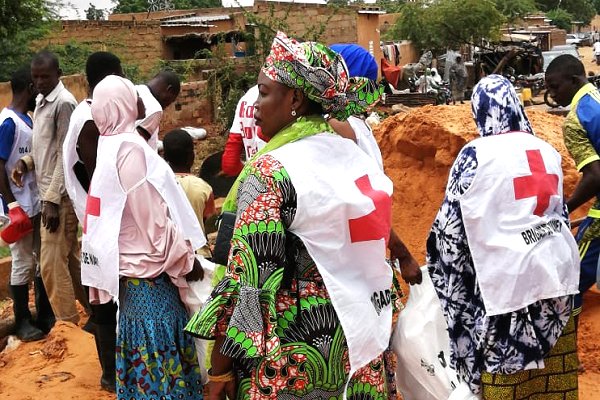 So far EAPs have been approved or are under review for a wide range of hazards in (alphabetically) Bangladesh, Ecuador, Mali, Mongolia, Mozambique, Niger, Peru, the Philippines and Zambia.

With Belgian Red Cross support, the Niger Red Cross was last week able to use part of its new EAP (with procurement contracts pending on other possible actions) (photo) to successfully reinforce a dyke holding back part of the flooded River Niger in the capital, Niamey.

Additionally, the IFRC issued a DREF grant for nearly US$ 300,000 to help the Nigérien National Society respond to seasonal floods that have now killed more than 50 people, according to Reuters quoting the government, many of them when their houses collapsed; nearly 300,000 people have now been affected by the floods countrywide.

This year the IFRC’s DREF has released more than 600,000 Swiss francs to support early action in Mongolia and Bangladesh, where the Red Cross Red Crescent activated EAPs for, respectively, dzud (severe winter), and cyclones and flooding.

At its launch in 2018 the FbA fund – developed from forecast-based financing with German government and Red Cross support – was described as a potential game-changer for the humanitarian sector.

Nigérien Red Cross volunteers last week rush to fill sandbags to shore up a dyke as part of an emergency action plan for forecast-based humanitarian action, for which the budget cap has just been significantly raised by the IFRC. (Photo: Gado Abdouramane/Climate Centre)