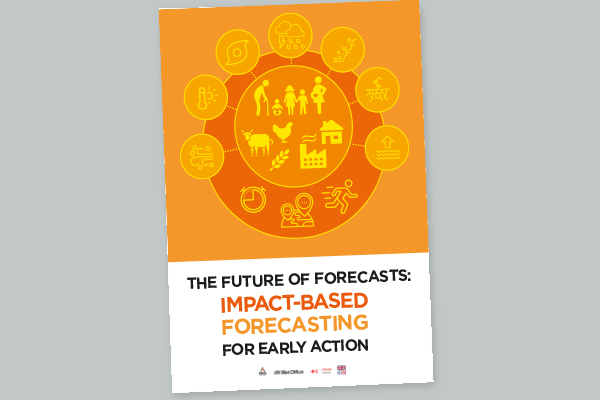 Without determined and ambitious action on climate, 200 million people a year could need international humanitarian assistance because of climate-related disasters and the socioeconomic impact of climate change, the IFRC has said.

But now a developing paradigm-shift in forecasting from what the weather will be to what it will do could enable early humanitarian action, and a new guide to this ‘impact-based forecasting’ was issued by the IFRC and the UK Met Office today.

Governments, disaster managers, humanitarian actors and the public need to know how hydrometeorological events might affect lives, livelihoods, property, and the economy to be able to take appropriate action, it argues.

The guide – The Future of Forecasts: Impact-Based Forecasting for Early Action – outlines steps needed to develop an impact-based forecasting service that enables anticipatory actions, combining existing forecast-based financing methodology with the technical expertise of the UKMO and other key actors.

It also chimes with the 2015 World Meteorological Organization guidance on impact-based forecasts that’s currently being updated and will cross-reference the guide.

Paul Davies, the UKMO’s Chief Meteorologist, said in a foreword that it was a desire to go the last mile and “narrow the gap between science and action…that provided the catalyst for a change to impact-based thinking.

“The core tenet of this paradigm shift is to bring differing communities together, to provide the mechanisms and a collective desire to make a difference on the ground, save lives, and reduce distress and disruption.”

He added that at a time of environmental and societal change, the “next frontier could be unlocked through the science of weather and climate or, equally, through embracing new technologies such as data analytics and artificial intelligence, and developing cognitive intelligence on future climates”.

The IFRC’s Director of Disasters and Crisis, Pascale Meige, said impact-based forecasting enabled complex scientific information to be made “actionable, enabling humanitarian interventions such as shelter strengthening by farmers in Philippine coastal regions before a typhoon makes landfall, or the distribution of veterinary kits to protect alpacas as source of livelihoods for families against cold waves in Peru’s Andes mountains.”

She added that through collaboration with hydrometeorological and disaster-management agencies and other key stakeholders, National Societies in at least 30 disaster-prone countries “are working to outsmart disasters by having pre-approved plans in place to launch forecast-based early action for extreme weather events; that number is growing.”

This year had seen “the first large-scale, coordinated inter-agency triggering of anticipatory actions by impact-based forecasts and warnings.

“As heavy monsoon rains hit Asia, four UN agencies and Red Cross Red Crescent partners worked alongside the Bangladesh government to anticipate the likely impacts and release funds to help communities at risk ahead of a flood peak.”

It is supported by the UK Department for International Development and also involves the four-year, UK-supported Asia Regional Resilience to a Changing Climate programme that aims to strengthen weather-forecasting across Asia.

More details about the guide will be shared at next week’s Climate:Red Summit.