17.5 million affected by floods and threatened by disease in South Asia 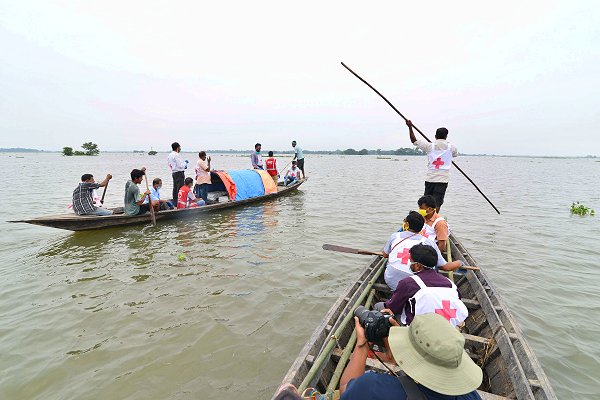 (This story is an IFRC press release issued yesterday in Dhaka and Kuala Lumpur.)

Monsoon floods in South Asia are robbing millions of people of their homes and livelihoods, with a mounting risk of more deadly disease outbreaks when health resources are stretched to breaking point by Covid-19.

So far almost 17.5 million people have been affected and more than 630 killed by major floods in India, Bangladesh and Nepal according to government figures.

Half of Bangladesh’s districts are underwater, leaving nearly 1 million families stranded and cut off in their villages.

Flooding and landslides in Nepal have left almost 200 people dead or missing.

In India, almost 12 million people are affected by the floods mainly in the northern states of Assam (photo) and Bihar.

Feroz Salah Uddin, Secretary General, Bangladesh Red Crescent said: “This is one of the biggest monsoon floods we have faced in many years and the worst may be yet to come, as we face growing risks of malaria, dengue, diarrhoea as well as this worsening Covid-19 pandemic.”

The monsoon season floods mean a high proportion of the population in South Asia is vulnerable to diseases such as dengue, malaria, leptospirosis and cholera.

In 2019, Bangladesh experienced its deadliest outbreak of dengue with at least 101,000 cases and almost 180 deaths. India reported 136,000 people were infected with the disease and many were hospitalized.

Previous years show how devastating these diseases can be for communities in South Asia, so Red Cross and Red Crescent teams in the region are urgently ramping up their flood-response activities, which include distributing mosquito nets and working with communities to reduce their exposure to diseases like malaria and dengue.

Covid-19 restrictions have hampered efforts to destroy mosquito-breeding sites and raise awareness in communities of how to prevent the spread of dengue and malaria, ahead of this year’s monsoon season.

At the same time, restrictions on the movement of people and increased screening for Covid-19 may be helping to keep other diseases from exploding for now.

“Millions of people are also gathered in confined spaces or sleeping in temporary shelters with limited access to food, safe water and protection from mosquitos, creating the perfect storm for the spread of mosquito and water-borne diseases.”

The majority of limited hospital beds, doctors and health resources have been redirected to focus on Covid-19 response as India deals with more than 50,000 recorded cases a day. Bangladesh and Nepal have surpassed 240,000 and 20,700 confirmed cases respectively.

South Asia now has more than 2.2 million cases of Covid-19 cases with fears that the total number of infections is much higher.

Dr Rimal, said: “The critical focus on saving lives in this pandemic and preventing the further spread of Covid-19 has diverted their resources from prevention activities such as dengue and malaria are going untreated. We are seeing evidence that people are reluctant to go to health facilities because they fear catching Covid-19 and getting more sick.”

The Indian Red Cross, pictured here in Assam, and other National Societies were this week going to the remotest areas to support communities reeling under the impact of devastating floods. Indian Red Cross volunteers have so far distributed more than 9,200 pre-positioned tarpaulins in Assam, as well as food, kitchen utensils, soap, drinking water and other relief. (Photo: Biju Boro/IRCS)