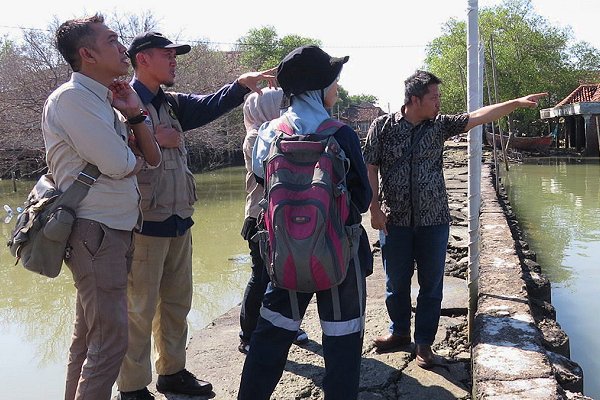 Further progress has been made in discussions involving Indonesia’s Coordinating Ministry for Maritime and Investment Affairs, several other ministries and government agencies, Partners for Resilience, and civil society bodies on a long-term plan for work aimed at strengthening policy, law and investment to prevent land subsidence, especially due to the extraction of ground water.

In a series of meetings in May and last month, initiatives were identified under a road map on subsidence launched last September, including the establishment of monitoring stations, studies of the impact on vulnerable cities of the extraction of ground water, improved management of water resources, and flood preparedness.

The road map is seen as timely since a number of cities on the north coast of Java and peaty areas of Sumatra and Kalimantan islands areas are effectively sinking; other coastal areas, including Jakarta, are regularly flooded by seawater at high tides.

The Indonesian capital, home to some 10 million people, has been described as “one of the fastest-sinking cities in the world”, partly due to excessive extraction of ground water for domestic and industrial use.

Work began on the road map in early 2018, involving the government, PfR agencies Wetlands International Indonesia and the Climate Centre, and other CSOs.

At the national level in Indonesia, visions for sustainable development include improved river management and accessible clean water, and the integration of climate issues and risk reduction into spatial planning.

At the city level, road maps on land subsidence are being discussed in the capital of Central Java province, Semarang, and Pekalongan, its major port.

Sustainable management of peat land is promoted by Wetlands International in Indonesia, but PfR and other stakeholders have been involved in dialogue and programmes to reduce the permanent conversion of peaty areas for unsustainable farming in Kalimantan and Sumatra.

However in some areas unless subsidence is stopped the restoration of coastal mangrove and aquaculture may no longer be feasible.

As work continued on the road map in May and June, Java saw tidal floods on the coast that reached further than usual because of subsidence.

“PMI welcomes this road map on land subsidence and hopes that a comprehensive work plan can be implemented,” said said Arifin Hadi, Head of the Disaster Management Division at the Indonesian Red Cross (PMI).

“This flooding is caused by a combination of sinking land surface, rising sea levels and higher waves.”

Subsidence even lowers the land in some areas below river or sea level, generating massive impact on coastal communities, wetlands and peat.

The road map was launched at an international conference on land subsidence, with Dr Heri Andreas, an expert from the Bandung Institute of Technology, as lead author.

One issue it identifies is the fact that efforts in many parts of the country are uncoordinated and isolated, lacking mainstreaming within an overall framework for investment.