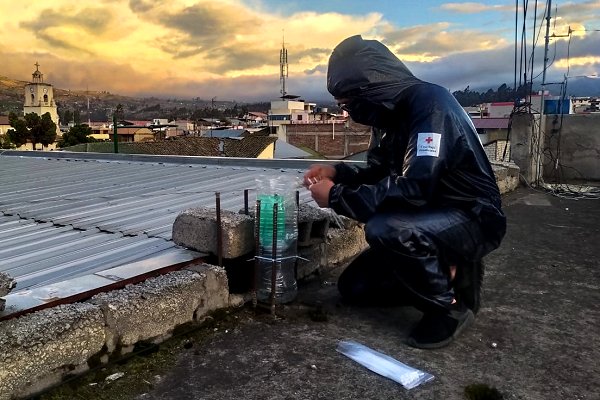 Last month’s eruption of the Sangay volcano in Ecuador provided Red Cross volunteers with an opportunity to test their improvised equipment for measuring ash fall.

The Ecuador Red Cross (ERC) is the first National Society in the world to deploy forecast-based financing for the hazard of volcanic ash clouds, whose movements are governed by winds that can be forecast.

A humanitarian early action plan for several of the country’s active volcanoes as part of the IFRC’s Disaster Relief Emergency Fund was finalized earlier this year, but was not triggered by the minor eruption in June.

The ERC is part of Ecuador’s Network of Volcanic Observers, set up last year by the Geophysical Institute of the National Polytechnic School, to train people countrywide to gather and communicate reliable information about eruptions.

ERC volunteers used locally-made “ash meters” over a period of a few days last month to report on ash falls from the Sangay volcano that affected several provinces but found they did not reach 2mm – the lower end of the threshold for humanitarian early action by the Red Cross.

At the moment, half of the nearly 100 pieces of equipment are held by the ERC, distributed among volunteers in 13 provinces of Ecuador.

The Geophysical Institute has also trained at least 80 ERC volunteers and technicians from the national disaster management system on aspects of the ash hazard, and late last month a virtual training was conducted that added almost 100 more ERC volunteers to the observer network.

Sangay has seen small eruptions for over a year that have had little impact because of its remote location, Reuters news agency reported, but a recent change in wind patterns that was also forecast pushed ash toward the coast and affected areas including Ecuador’s largest city, Guayaquil.

The news agency quoted the Geophysical Institute as saying it expected “minor volcanic eruptions” to continue for a while, but it did not expect a major eruption.

Ecuador Red Cross volunteers are part of a national network of volcano observers. Their locally made instruments (pictured) help them assess the danger of ash clouds. (Photo: ERC)