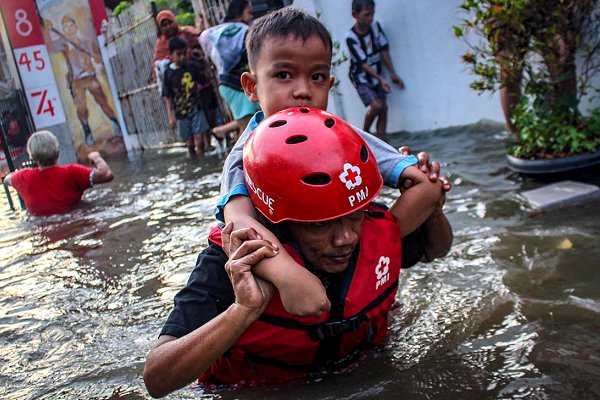 “Challenges posed by the devastating rains and floods in Asia are being complicated by Covid-19,” said WMO Secretary-General Petteri Taalas.

But, he added, while “global attention is understandably focused on the pandemic, this should not distract us from the continuing need for investment in multi-hazard early-warning systems to boost resilience.

“This is especially true given that climate change is increasing the risk of extreme rainfall events, flooding and coastal inundation.” The WMO and national meteorological and hydrological services would continue to work to protect lives and livelihoods.

Late last week the WMO cited the South-East Asia Flash Flood Forecast System as saying that more than 200mm of rainfall was possible in just 24 hours in parts of Bangladesh, Bhutan, north-east India, Myanmar and Nepal.

Parts of central and northern India, for example, have had “more than 150mm above average monsoon rains so far this year,” said the WMO, adding: “Tens of thousands of people have been forced out of their homes in the Assam region…and there has been coastal flooding in the state of Gujarat.”

‘Covid-19 has caused a severe international health and
economic crisis, but failure to tackle climate change
may threaten human well-being, ecosystems
and economies for centuries’

The WMO also quoted the Head of its Hydrological and Water Resources Services Division, Hwirin Kim, as telling last week’s online workshop of the Flash Flood Guidance System that many of the thousands of people who die in riverine and flash floods “could be saved by improved early warnings, information about the risks of these sudden-onset events, and better water resource management”.

That workshop was led by the India Meteorological Department, the system’s regional centre, and involved more than 100 forecasters from at least 40 IMD offices and others from Bangladesh, Bhutan, Nepal and Sri Lanka.

National Societies across Asia have been responding to the floods, including in Bangladesh where late last month the Red Crescent implemented early actions with forecast-based funds from the IFRC to protect the lives and livelihoods of more than 16,500 at-risk residents in the districts of Kurigram, Gaibandha and Jamalpur.

At least 270,000 people were evacuated in four prefectures across Japan’s southernmost main island, Kyushu, meanwhile, after what the national broadcaster, NHK, described as “record-breaking” rainfall.

“Over the past 100 years, global temperatures have risen by 0.73℃, while the temperature in Japan has gone up by 1.13℃,” according to NHK, which quoted studies that “suggest the frequency of heavy rain at a rate of at least 50mm per hour has increased by 40 per cent over the last decade.”

In a separate statement last week the WMO said the global temperature is likely to be at least 1°C above pre-industrial levels in each of the five years to 2024, and there is a 20 per cent chance it will exceed 1.5°C in at least one year.

The predictions come in the latest Global Annual to Decadal Climate Update, led by the UK Met Office, which provides a climate outlook for the next five years and is updated annually.

The study showed, “with a high level of scientific skill, the enormous challenge ahead in meeting the Paris Agreement” on the 2°C goal and trying to limit the rise even further to 1.5°C, said Mr Taalas last week.

The WMO had stressed that the economic slowdown from Covid-19 was not a substitute for climate action; because CO2 lasts a long time in the atmosphere this was not expected to lead to a reduction of atmospheric CO2.

“Whilst Covid-19 has caused a severe international health and economic crisis, failure to tackle climate change may threaten human well-being, ecosystems and economies for centuries, and governments should use the opportunity to embrace climate action as part of recovery programmes and ensure that we grow back better,” he said.

The Red Cross rescues people in flood affected areas of the Indonesian city of Tangerang earlier this year. (Photo: IFRC)