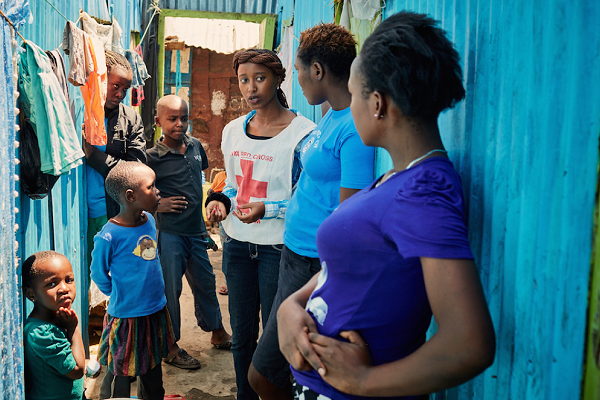 The IFRC and Climate Centre today released their new City Heatwave Guide for Red Cross Red Crescent Branches, designed as a companion to the one primarily for municipalities issued last July at UN in New York, in the midst of record-breaking heat in many parts of the Northern Hemisphere, especially Europe.

The new document is “tailored towards practical actions that can be led by Red Cross Red Crescent branches in preparing for, and responding to, heatwaves in towns and cities,” it says.

“While aspects of these actions may be new, most recommended actions can be easily integrated into existing branch activities.”

With many countries now facing dual risks from heat and Covid-19, a related expert webinar today was focusing on questions like how people can cool off outdoors while avoiding infection, and how medics and volunteers can stay cool while wearing PPE.

An appendix comprising a checklist on heat danger and Covid-19 to accompany the guide has also been published.

Temperatures in built-up areas tend to be relatively hotter as buildings, roads and pavements absorb heat and release it only slowly.

‘Urgent, timely action during a heatwave
can drastically reduce deaths, and useful measures
are simple and cost little or nothing’

IFRC President Francesco Rocca said in a foreword: “People living in urban areas are amongst the hardest hit when a heatwave occurs because these areas are hotter than the surrounding countryside.

“Over half the world now lives in urban areas and this is projected to increase to two-thirds by 2050. It is crucial that Red Cross Red Crescent staff and volunteers integrate actions to reduce heat risks into their day-to-day operations in urban areas.

“This guide is intended to help branches understand the heat risks they face and integrate simple, low-cost, lifesaving actions into routine activities.

“It can be used on its own or alongside [last year’s] Heatwave Guide for Cities, which helps city staff to understand heat risks, develop an early-warning system and adapt urban-planning practices.”

The new guide points out that deaths from heatwaves globally are likely to have been underestimated because there is no systematic way to count them.

“It is therefore increasingly important for the Red Cross Red Crescent to be aware of the dangers that heatwaves can pose, to understand the vulnerability of specific groups and to take practical action to save human lives,” it adds.

Lead Author and Urban Manager Julie Arrighi pointed out that this is now true even in countries in which it’s hot most of the year, or where heat has not been an issue in the past.

“Urgent, timely action at scale during a heatwave can drastically reduce deaths from extreme heat,” she said, “and many useful measures are simple and cost little or nothing.”

A report last month from the Brussels-based Centre for Research on the Epidemiology of Disasters said that while Asia was the continent most affected by disasters in 2019, the deadliest event – judged singly – by excess mortality of more than 2,500 people was the summer heatwave in Europe, specifically in France, Belgium and the Netherlands.

Climate scientists last year found the second record-breaking heatwave in Europe was made up to 3ºC hotter and much more likely by climate change.