Fostering anticipatory action on floods through social protection in Nepal 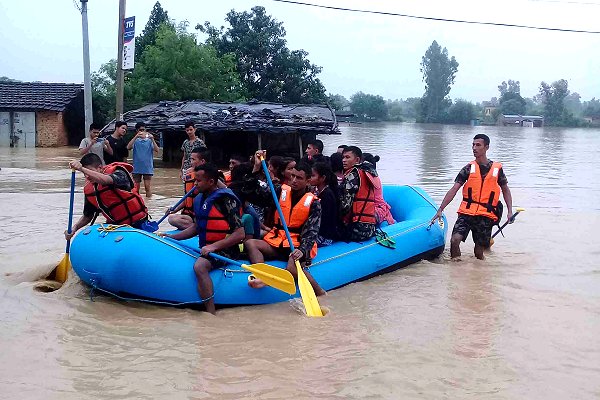 (This story summarizes a master’s thesis by Sabrina Desroches which is also a Climate Centre contribution to Nepal’s forecast-based financing programme that may be expanded by the Red Cross to include ideas discussed here.)

How can social protection be combined with forecast-based financing (FbF) to optimize anticipatory relief for climate-related disasters, especially floods?

This was explained by their pre-existing day-to-day vulnerabilities, which increase their sensitivity to hazards while also reducing their ability to undertake effective coping strategies.

The study revealed that within and between SSA beneficiary groups, individuals are not uniformly exposed or able to adapt to climate-related disasters.

In term of coverage, the study found nearly 7 per cent of flood-exposed individuals are likely to be SSA beneficiaries; consequently, existing SSA coverage within flood-exposed wards does not currently overlap with a large share of flood-exposed households in Bardiya.

In order to effectively support flood responses, the outreach afforded by a combined FbF-social protection approach that targets current SSA beneficiaries would have to be expanded by several orders of magnitude, either via increased SSA beneficiary targeting and/or combining the approach with other initiatives.

One senior local adviser on risk said: “There is a gap in terms of the access to information and early warning information that needs to be understood from both a language and educational perspective.

“And then also the lack of ability sometimes, even if they get past those two barriers, to take any action.”

An intersectional approach would encompass differing needs for social protection arising from characteristics such as disability, age, gender, ethnicity, and others.

The research outlined the anticipatory relief that could optimize humanitarian responses: cash, food, early warning and assistance with evacuation – all tailored to address the particular vulnerabilities of groups.

Previous research has tended to focus on cash-based action, and as prices of food and transport rise during and after disasters, just as livelihoods are hindered or made impossible, many needs can indeed be met by such interventions.

Nonetheless, ensuring the availability to SSA beneficiaries of early-warning systems, appropriate food, transport and shelter are all goals that cannot be met solely via cash transfers.

Combining cash interventions with non-cash action can be more effective at meeting needs for anticipatory relief, fulfilling needs that are not contingent upon monetary capabilities.

The study presented the case for using the SSA system to identify some groups in Bardiya most vulnerable to floods, combining social protection and FbF.

The analysis demonstrated the need for a people-centred approach within an integrated system, with a recognition of how divergent vulnerabilities are associated with relief needs and preferences while intersecting ones can compound challenges.

Any forecast-based intervention will be most effective when it takes into consideration the relationships between differing vulnerabilities and respective needs.

The research also demonstrated that combining social protection and FbF necessitates both ‘vertical’ and ‘horizontal’ expansion in order to optimize anticipatory action to floods.

Vertical expansion provides anticipatory aid to current social protection beneficiaries in the event of a forecast flood through increased regular payments, a top-up payment, or non-cash relief; horizontal expansion would increase the number of beneficiaries to include people entitled to SSA but not receiving it and/or other people affected by floods.

The research described how additional groups uniquely vulnerable to climate hazards, particularly flooding, can be identified with geographic, livelihood and demographic factors; women, children of all ages, and farmers were found to be among these groups.

The research concluded that combining social protection and FbF in the context of floods would contribute to social protection that is both sensitive to shocks and aids climate resilience overall; similar efforts to address other climate hazards would strengthen this process.

Nepal Red Cross volunteers and soldiers assess isolated communities by dinghy in 2017 floods in Bardiya. A new study focused on the district suggests the Nepal’s existing social security network could be deployed to use forecast-based financing to reduce vulnerability to floods in a flexible, people-centred way. (Library photo: Nepal Red Cross Society)