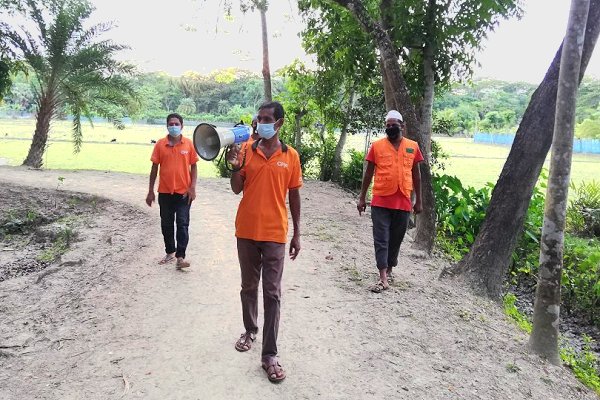 The IFRC has been preparing for a major humanitarian response with Cyclone Amphan – described as one of the strongest storms in the Bay of Bengal this century – making landfall today in the coastal border area of India and Bangladesh.

In Bangladesh more than 14 million people live in the cyclone’s path, the IFRC said in a press release today; India’s Odisha state was evacuating 1.1 million people along its own coastlines.

Northern parts of Myanmar, including Rakhine state, not in the cyclone’s direct path, are also expected to be affected, the IFRC added.

This includes more than 134,000 Swiss francs from the forecast-based action component of the IFRC’s Disaster Relief Emergency Fund that will support 20,000 vulnerable people in Bangladesh with similar relief, as well as precautionary measures against COVID-19.

“We are concerned that Cyclone Amphan will put vulnerable communities at a dual risk during the COVID-19 pandemic,” said Jess Letch, Manager of Emergency Operations at the IFRC’s Regional Office for Asia Pacific.

“Our biggest challenge is going to be ensuring that the millions of people at risk of losing their homes and livelihoods get the relief and shelter they need, while doing all we can to keep them safe from coronavirus.”

IFRC Head of Bangladesh Country Office Azmat Ulla added: “With the Bangladesh Red Crescent Society, we are enabling communities to take all sorts of preparedness measures to reduce the loss of life and livelihood in the coastal districts including the camps in Cox’s Bazar…

“Forecast-based actions mean the communities no longer wait for a cyclone to hit, rather anticipate it and act early.”

“We have seen many mega-cyclones in the past that have brought massive devastation in this region. This funding allows Bangladesh Red Crescent to take actions to reduce the impact of such an event.”

Thousands of Red Cross and Red Crescent volunteers have been mobilized across India, Bangladesh and Myanmar to share early warning messages, help communities prepare and support evacuations where needed.

The authorities in Bangladesh authorities have prepared 12,000 shelters – three times as many as usual to help with physical distancing and other COVID-related measures.

In India, coronavirus quarantine centres are already being moved inland to accommodate the cyclone evacuees.

An early action protocol for cyclones in Bangladesh outlined the anticipatory measures the Red Crescent Society will implement, in work supported by the German government and Red Cross and developed by National Societies and the Crescent Climate Centre.

It was revised to take account of COVID, the IFRC wrote today. While the priority remains evacuation to shelters if ordered by the government, volunteers also share hygiene information and items, identifying alternative evacuation spaces to enable physical distancing, and cleaning and disinfecting.

This is only the second time IFRC’s early-action funding mechanism has been used after 210,000 Swiss francs were released to the Mongolia Red Cross in January based on a forecast extreme winter.

“By taking forecast-based early action well ahead of the cyclone, the Red Cross and Red Crescent Movement is setting a precedent, especially in the face of this dual crisis,” Gaurav Ray, head of the German Red Cross Bangladesh office, said today.

Red Crescent volunteers and the Cyclone Preparedness Programme will play a critical role in alleviating the distress faced by communities at risk.”

The IFRC was yesterday and today finalizing early actions in preparation for the arrival of Cyclone Amphan, described as one of the fiercest storms to come out of the Bay of Bengal this century. Three National Societies are involved in preparedness and response. (Photo: BDRCS)