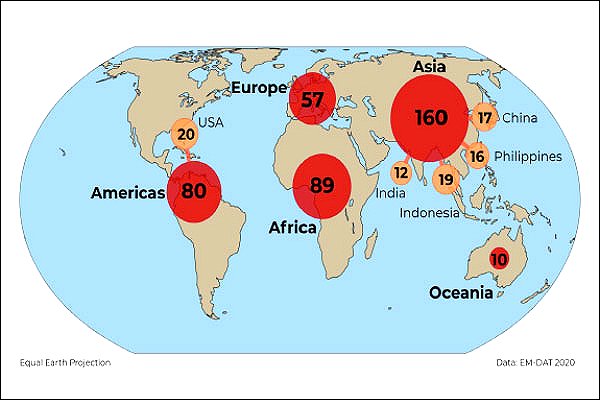 A new report on 2019 from the Centre for Research on the Epidemiology of Disasters (CRED) shows that Asia was the continent most affected by disasters in 2019, with 40 per cent of all events, 45 per cent of deaths, and 74 per cent of people affected worldwide.

The monsoon flood in India from July to October, which killed nearly 2,000 people and affected 13 states, mainly in the north, was the second-most lethal event.

But the deadliest disaster last year, when taken as a single event and judged by an excess mortality toll of more than 2,500 people, was the summer heatwave in Europe, specifically in France, Belgium and the Netherlands.

Two storms were the next deadliest: Cyclone Idai in Mozambique and Zimbabwe, with nearly 1,000 deaths, and Hurricane Dorian in the Bahamas and the US, with at least 358 dead or missing.

The figures from the widely respected CRED group, who are based at the Université catholique de Louvain in Brussels, were compiled by authors Rémi Froment and Regina Below.

‘The impact of heatwaves is greatly underestimated’

They record 11,755 people killed in at least 396 disasters that affected 95 million other people and cost nearly US$ 130 billion, the great majority of events being climate-related – “slightly over the average of the last ten years [of] 343 disasters,” says the report from CRED’s Emergency Events Database, known as EM-DAT.

“The year was particularly characterized by large wildfires, which caused human losses and which also had a dramatic impact on the environment,” say the EM-DAT authors.

Australian wildfires caught the public’s attention, they write, and out of all the fires that started in 2019 the two other most significant events were the October fires in California and those that affected several countries in the Amazon region of South America.

They add that wildfires in South Sudan in May and China in April left 50 and 30 dead respectively, but had less media impact.

In general, “wildfires are often due to a human factor,” EM-DAT says, “then increase by natural conditions such as lack of rain, drought, wind, high temperatures, and this mechanism was likely the same” last year.

Analyses in 2019 and this year of the Australian fires and Europe’s heatwave by World Weather Attribution scientists showed that climate change played a role in both events.

Climate change increased the chance of “extreme fire weather” in Australia by at least 30 per cent, the group said in March; after two separate studies last year, they concluded that every heatwave analysed in Europe going back to the catastrophe of 2003 was “much more likely and more intense due to human-induced climate change.”

Heat in July 2019, the WWA group said, “was so extreme…that the observed magnitudes would have been extremely unlikely without climate change.”

EM-DAT now says the economic impact of wildfires globally has increased sharply since 2014: from US$ 279 million to US$ 30 billion last year, mostly in the US.

However, they conclude that: “Extreme temperatures, especially heatwaves, are under-reported and current figures do not give the complete picture of their massive human impact, either in Europe or in the poorest countries.”

EM-DAT is an important source for the IFRC’s annual World Disasters Report and the humanitarian community as a whole.

In January, using provisional figures for 2019 but before excess-mortality data for European heatwaves was complete, the group said that 98 million people had been affected in climate-related disasters worldwide.

“The impact of heatwaves is greatly underestimated; we only see the tip of the iceberg. Very little research is done on the impact on the health of young children, for example, or on the increase in hospital admissions.

“But this phenomenon will get worse over the next few years.”

This month the Global Heat Health Information Network (of which the Climate Centre is a steering-committee member) is holding a series of workshops for specialists on how to reduce heat impacts; the GHHIN has also issued fact sheets on heat and COVID-19.

The IFRC and Climate Centre last July launched their Heatwave Guide for Cities at a news conference at UN headquarters in New York.

An EM-DAT infographic illustrating the group’s report on disasters in 2019, with the numbers in red circles showing events per region; the numbers in yellow circles are sub-sets of the regional totals. (Source: CRED)