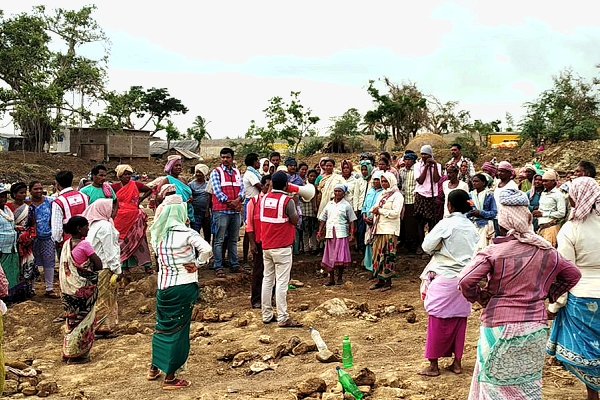 The new Global Report on Internal Displacement (GRID), published last week, says the number of internally displaced people (IDPs) around the world “has reached an all-time high”, mostly because of conflict and violence in 61 countries.

It estimates that nearly 46 million people have now been displaced by fighting, the majority in (alphabetically) Afghanistan, Colombia, the Democratic Republic of the Congo, Syria and Yemen.

Just over 5 million in 95 countries, however, are displaced because of disasters, says the report from the Internal Displacement Monitoring Centre (IDMC), part of the Norwegian Refugee Council.

This number “includes 1.2 million people displaced by years of drought and floods in Afghanistan [and] more than 500,000 by monsoon rains in India,” says an IDMC press release, with 33,000 still uprooted a decade after the 2010 Haiti earthquake.

“The global coronavirus pandemic will make them more vulnerable still. It will compromise their already precarious living conditions, by further limiting their access to essential services and humanitarian aid.”

The number of new displacements in 2019 – 33.4 million – was the highest since 2012, 8.5 million of them amid conflict “in countries like Syria, DRC, Ethiopia, South Sudan and Burkina Faso,” says the report.

But nearly 25 million of these were triggered by disasters, including 4.5 million by Cyclone Fani in India and Bangladesh, Cyclones Idai and Kenneth in Mozambique, and Hurricane Dorian in the Bahamas.

Heavy rains in Africa led to widespread flooding and produced in some 2 million new displacements, according to the GRID research (see infographic, top five countries).

“Year after year, conflict and violence uproot millions of people from their homes. Collectively, we are failing by epic proportions to protect the world’s most vulnerable,” said Jan Egeland, Secretary General of the Norwegian Refugee Council.

“Politicians, generals and diplomats must rise above stalemates and seek ceasefires and peace talks, not guns and grenades. In this age of coronavirus, continued political violence is utterly senseless.”

People driven from their homes by conflict in places like Nigeria, South Sudan and Yemen are later hit by drought and floods, GRID says, while in countries around the Lake Chad basin like Burkina Faso, Mali and Niger rising temperatures and dwindling access to water have fuelled existing conflicts.

They create “perfect storms where people are hit way harder,” he said in an interview for a Deutsche Welle report on the GRID. Social distancing, for instance, could leave school gymnasiums and church halls less able to shelter people from storms or prevent the authorities bussing them away from danger.

For people forced into camps or slums there may not be enough water to maintain regular handwashing, while many displaced people do not have financial or food reserves to survive through the next disaster.

When the shocks vary in type, “people feel they’re getting hit from all sides,” Professor Van Aaalst told DW.

The report says efforts to prevent and respond to internal displacement were visible in many countries in 2019, however, including several in Asia which demonstrated that “displacement in the form of pre-emptive evacuations saves lives, and that effective early-warning systems and other measures to reduce disaster risk avert the worst impacts of disasters.”

In one of its most recent statements on the interaction between conflict and climate worldwide, the ICRC’s Director-General Robert Mardini told a round table in New York it is focused on ensuring there are systems in place to strengthen people’s resilience to climate risk, that there is coherence between humanitarian, development and peace actors, and climate finance for countries experiencing “conflict, violence or fragility”.

Indian Red Cross volunteers warn residents in a coastal area of the approach of Cyclone Fani last year – the extreme-weather event that alone generated 4.5 million new IDPs there and in Bangladesh, according to a report out last week. (Photo: Indian Red Cross via IFRC)