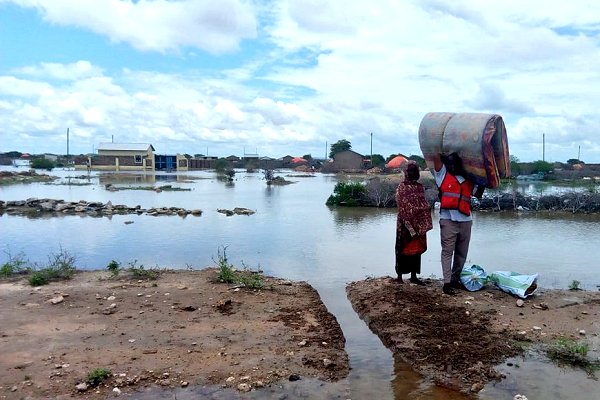 Fifty-one new reporting-points – including 24 in Kenya, the first there – came online for African rivers at the end of last month, assisted by the UK-supported project Forecasts for Anticipatory Humanitarian Action (FATHUM).

The new points – both virtual (strategic positions on the map read by the system) and physical gauges – will enable hydrological forecasts to be accessed in real time.

Eight new points measuring river flows in each of Mali and Mozambique bring the totals there to 31 and 15 respectively, while the total in Uganda, an FbF pioneer nation, has now increased from three to 14.

In the colour-coded GloFAS presentation, the reporting points show grey for normal- or low-flow conditions, then turn successively yellow, red and purple as the flood danger rises above specified thresholds.

Sidiky Sangare, a hydrologist with the Direction Nationale de l’Hydraulique du Mali (DNH), was among a group of specialists from four African states to attend a summer school last year at the University of Reading, a FATHUM partner, centred on flood forecasting, FbF triggers and the use of GloFAS.

The Malian stations in the GloFAS interface were chosen by the DNH for their importance in the national early-warning system for floods, he explained.

“Most of these stations are in the most vulnerable areas for floods and all of them cover key strategic points.”

The DNH, he adds, one of the main actors in the national platform for disaster risk reduction, “already uses GloFAS to issue flood alerts in some of Mali’s river basins, as well as to inform and educate local people and stakeholders about flood risk”.

The addition of new African stations in GloFAS is a product of ongoing exchanges between the university’s FATHUM specialists and the African team on its course last year, who also came from Mozambique, Uganda and Zambia and at whose request most of the new stations were added to the GloFAS system.

The Mozambique Red Cross also contributed to the selection of the new stations there.

A number of African Red Cross Red Crescent societies are working with national agencies to gather and process such data, complementing their own efforts with GloFAS and other international systems.

The team who came to the University of Reading last year were planning to advise on integrating GloFAS (info@globalfloods.eu) into their national systems, while working with their National Societies to develop FbF triggers for humanitarian flood-relief.

Torrential seasonal rain caused devastating floods in nearly 30 counties of Kenya, affecting tens of thousands of people, last November – one of the most recent flood disasters in Africa to trigger an international response. New hydrological reporting points there and in three other countries could help local responders get where they’re needed faster. (Photo: KRCS)