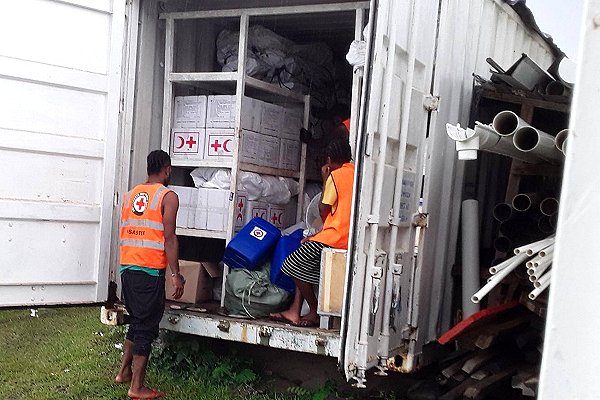 The money will assist the National Society with “[early warning early action]-related activities including the deployment of staff and volunteers as well as further movement of prepositioned stocks closer to areas most likely to be affected,” the IFRC said.

A second allocation “may be required to replenish stocks utilized as well as support further actions, based on needs and assessment results in the aftermath of the storm.”

As of late afternoon Monday local time, the Vanuatu meteorological service said Harold had been moving eastwards as a “severe Category 5 storm”, with maximum sustained winds close to the centre estimated at 215kph.

The IFRC said it was expected in the Fiji area Wednesday, where the National Society was now making preparations, adding that among the hazards associated with the storm were “heavy rainfall and flash flooding, including possible landslides”.

The VRCS had activated its Emergency Operations Centre for COVID-19 on 23 March, the IFRC said, but the National Society had now “ceased all COVID-19 field activities due to the safety, health and well-being of [staff and volunteers] and also to give clear instructions to start off preparations” for the cyclone.

The VRCS prepositioned 100 sets of essential household items in the Vanuatu branch offices of Torba, Penama, Malampa and Tafea, as well as 600 sets in each of its headquarters and in the Sanma branch; over 1,000 Red Cross volunteers are active in communities.

The IFRC said local and partner National Societies in the Pacific and its country team in the Fiji capital Suva have been “in regular communication and on high alert” since the start of Tropical Cyclone Harold.

It said the cyclone “could mean that people will be displaced for at least a week [and] shelters will need some support with blankets and mosquito nets, together with some key messages taking into consideration COVID-19 preventions.”

Sune Bulow, Manager of the IFRC Emergency Operations Centre in Geneva, tweeted today that “[w]hile the world is focused on COVID-19, we must not forget other hazards”.

The Red Cross operation for Harold is being supported by the Operations Coordinator for the Pacific in the IFRC’s Asia Pacific Regional Office in Kuala Lumpur.

Vanuatu Red Cross volunteers this weekend assembled relief stocks for distribution to branches ahead of the arrival of Tropical Cyclone Harold, reported the IFRC’s Fiji-based Communications Manager for the Pacific, Carl Gustav Lorentzen. As night fell on the Vanuatu islands Monday, he tweeted, “even after interacting with terrain the cyclone remains extremely powerful [and] life-threatening conditions will continue.” (Photo: VRCS via social media.)