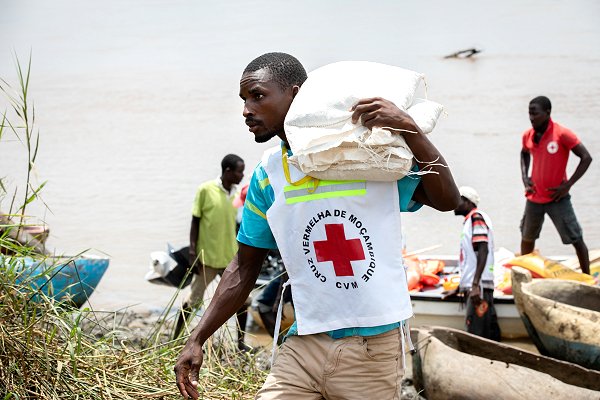 (This story is an IFRC press release issued earlier today in Beira, Nairobi and Geneva.)

It is almost exactly a year since Cyclone Idai hit Mozambique, but communities remain intensely vulnerable to the next big disaster, which is a matter of “when, not if”, the IFRC warned today.

Cyclone Idai was 2019’s biggest disaster, killing more than 650 people and affecting more than 1.8 million others in the Southern African country.

While Red Cross teams have made significant progress in the response that followed the devastating cyclone, including emergency and recovery assistance to at least 310,000 people, the scale of the needs continues to outstrip resources available to meet them.

The Red Cross Red Crescent Climate Centre notes that cyclones like Idai “fit what we expect to see in a world where the climate is changing: stronger and more destructive storms, both in terms of wind intensity and amounts of rainfall, and thus flooding and landslides.

“To avoid impacts from ballooning even further, we must minimize further warming and increase ambition to reduce risk and preparedness for such events.”

Yet thousands of people remain in a precarious situation, vulnerable to extreme weather that has been hitting the region.

‘Significant investments are needed
to “build back better” and include support
for climate-smart, risk-informed development’

Recent events show how quickly communities can be set back.

In the past month, the Buzi district, which was devastated by Cyclone Idai, was again hit by severe flooding (photo), with thousands displaced from their homes and many left clinging to trees to avoid being swept away by the rising river.

Following last year’s cyclones, the Mozambique Red Cross has strengthened its branch in Buzi, allowing an immediate local response to last month’s disaster, saving scores of lives in the days before outside help could reach the district.

“In addition to meeting humanitarian needs, significant investments in the recovery phase are needed in affected countries to ‘build back better’ and include support for climate-smart, risk-informed development,” Alberto continued.

The IFRC emergency appeal launched after Cyclone Idai is 86 per cent covered, leaving a funding gap of 4.4 million Swiss francs to complete the two-year response and recovery programme.

Muchenessa, Beira district, 3 March 2020. A year after Idai people are still struggling to get back on their feet, still dealing with the consequences of Cyclone Idai, and are once again hit by floods. In the photo, a Red Cross food distribution by boat on the Buzi river. (Photo: Anette Selmer-Andresen/IFRC)