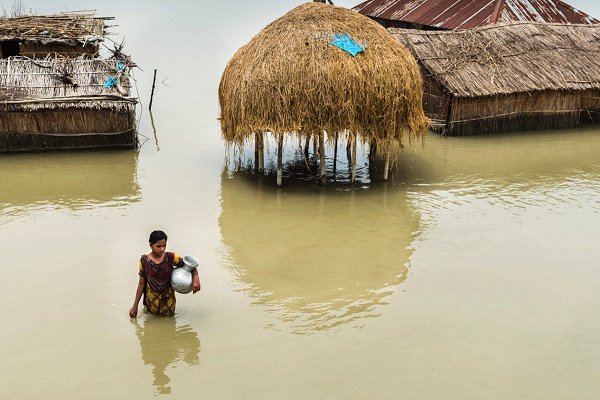 The Red Cross Red Crescent Movement late last month published details of its collective ambitions on climate, saying it “has made its choice and is mobilizing to meet the urgency and scale of the crisis.”

The new document, Ambitions to address the climate crisis, regarded as broader than previous frameworks, says climate change is already having “major humanitarian consequences,” particularly for the poorest and most vulnerable.

It spells out in detail how the Movement’s 192 National Societies, 165,000 local branches and 14 million volunteers, will make their work “climate-smart and increase our climate change adaptation and disaster risk reduction [DRR] efforts, working with communities on the front lines of climate change.

“We will consider climate risks in all we do and anticipate extreme-weather events ahead of their impact. And we will reduce our own environmental footprint, greening our operations and pursuing nature- and ecosystem-based solutions.

“We also call on the world’s citizens, governments and companies to do their part to reduce emissions but also to resolutely address the rising risks already facing the most vulnerable.”

Ambitions says the science is clear: “The frequency and severity of extreme weather events have increased and will continue to do so, together with more uncertainty…

“Without drastic, immediate and global reductions in greenhouse gas emissions, the impacts of climate change will pose existential threats to societies and ecosystems.”

States this year are due to update their plans through the Nationally Determined Contributions process, and the document says “National Societies are in a unique position to support their government counterparts in taking necessary climate action.”

The IFRC’s Strategy 2030 identifies climate change as the first of five global challenges and makes it a focus over the coming decade; the ICRC’s Strategy 2019–2022 includes adaptation to the combined consequences of conflict and climate shocks as one of its key objectives.

The Movement will work across four main pillars of action, according to the new document.

It will scale up climate-smart disaster risk reduction, early action and preparedness, so communities can be “better prepared to manage forecasted weather events and new climate extremes, including by being able to access resources ahead of their impact.”

Climate-risk management will be systematically integrated into health programmes and climate information will be deployed “to anticipate, prepare for and reduce the impacts of climate-related health emergencies, including in conflict settings” and with protocols for early action in more countries for more hazards.

‘We call on the world’s citizens, governments
and companies to do their part’

There will be “better mapping, understanding and predicting [of] climate-related population movements.

The IFRC’s Climate Centre “will serve as the principal technical resource to achieve these ambitions, providing scientific analysis and guidance, developing and supporting the use of tools and guidance material,” the Ambitions paper adds.

“It will also serve as an innovation and research hub, generating new ideas and approaches that can support climate risk management within and beyond the Movement.”

Floods in 2017 in Bangladesh, one of the countries in the world most vulnerable to climate impacts such as storm surges and rover floods. The picture appears in a new document outlining the ambitions of the Red Cross Red Crescent Movement on climate. (Photo: Aminul Shawon/BDRCS)