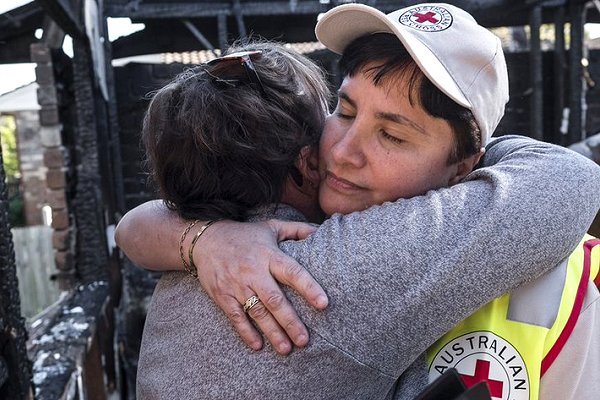 Climate change increased the chance of the “extreme fire weather” witnessed in Australia over the past few months by at least 30 per cent, says a new analysis by World Weather Attribution scientists, but the true figure could be “much higher” because models underestimate the trend in heat extremes – one of the main factors making up indicators of fire danger.

If global temperatures were to rise by 2°C, the study adds, the fire-weather conditions experienced in summer 2019–20 “would be at least four times more common as a result of human-caused climate change,” a WWA press release says.

The researchers, from Australian, European and American universities and research institutes, used an international Fire Weather Index first developed by Canada and France and adapted for use in Australia and other countries.

They compared present-day conditions, with more than 1°C of global warming, to the climate as it was around 1900, focusing on heat and periods of very low rainfall.

Heatwaves like Australia’s this summer “are now hotter by 1–2°C than they were around 1900”, the WWA release says; the scientists did not, however, “directly link the recent record low annual rainfall nor the driest month of the fire season with climate change.”

‘None of this is normal’

FWI conditions in the last 40 years “have worsened more rapidly than simulated by climate models…to a large extent because of more intense heat events,” the WWA press release says.

Some other potential links between climate change and fire risk in Australia were not included in the study, such as sources of ignition sources and reduced scope for controlled burning.

The Australian government Bureau of Meteorology’s most recent statement on climate, in January, reported widespread “severe fire weather” throughout 2019, with its own Forest Fire Danger Index at its “highest since 1950, when national records began”.

The BOM’s full State of the Climate 2018 report said climate change, including increasing temperatures, is contributing to a worsening FFDI and “an associated increase in the length of the fire-weather season”.

“Climate change is now part of Australia’s landscape, said one of the WWA study’s joint authors, Dr Sophie Lewis of the University of New South Wales.

“There is evidence that Australian fire seasons have lengthened and become more intense, and extreme temperatures have played a role in this.”

The Australian Red Cross, which to date has raised the equivalent of nearly US$ 30m for its humanitarian response to the fires, has described the episode as “extraordinary times with extraordinary responses”.

“None of this is normal,” wrote ARC Chief Executive Officer Judy Slatyer in December. “The social, economic and environmental impact is going to be incomprehensible, threatening much that is unique and special about who we are, and the nature we share this country with.”

The Red Cross late last month reported an easing of conditions after “significant rain” in Victoria and New South Wales.

For the first time since September the Australian National Society was able to close its Register.Find.Reunite service that has assisted at least 65,000 people; it’s providing “support to affected communities at recovery centres, over the phone and through home visits, [and] developing tailored recovery programs to help support communities over at least the next three years.”

“This study shows that these rising risks are reflected in the huge losses in the Australian bushfires that it will take even a wealthy, well-prepared nation a long time to recover from.

“Adaptation and resilience are critical but on their own are not enough: reducing emissions is also crucial.”

The WWA group cite studies and official figures as showing that the summer fires across Australia, and particularly along the south-east coast, burned at least 11 million hectares – an area larger than Ireland or South Korea, destroyed nearly 6,000 buildings, and killed at least 34 people and over 1.5 billion animals. The total economic cost could reach US$ 66 billion.

Emphasizing that the new study provides only a “lower bound” (i.e. conservative) estimate of the impact of climate change on fire, Professor Friederike Otto, a study author and Acting Director of Oxford University’s Environmental Change Institute, said: “We do not need to do an attribution study to know that climate change is happening, but to understand what climate change means where people live, we do.

She added that “we need to continue to test our models in the real world to improve them so we can provide higher-confidence information on risk…where people live and make decisions.”

The WWA scientists, who say the chief aim of their methodology is to provide findings relatively quickly after an extreme event, have are submitting their results to the scientific journal Natural Hazards and Earth System Sciences, where it will be available for open peer-review.

The Australian Red Cross launched and maintained one of their largest humanitarian responses of its kind in response to the summer fires that were described as unprecedented. Australian meteorologists and now international climate scientists have found that largely though increased atmospheric temperatures associated with climate change such disasters are becoming more likely. (Photo: ARC via Twitter)