Full house for latest conflict-climate round table in New York 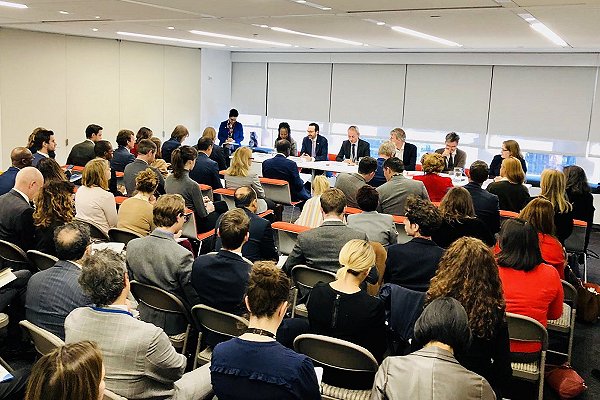 There was a full house on Friday at the Belgian mission to the UN for the latest round of international discussion on the humanitarian impacts of climate change in conflict areas – “clearly an emerging topic that merits close attention,” the mission tweeted.

The session was jointly organized with the ICRC, IFRC and the Climate Centre, and the Nigerien and German missions.

Jeroen Cooreman, the Deputy Permanent Representative of Belgium, which is Security Council president for the month of February, said his country was working to mainstream climate change in the Council’s analyses.

Climate change was linked to the prevention agenda; it could both exacerbate existing conflicts and increase the risk of relapse after conflicts first ended.

Ambassador Abdou Abarry of Niger said the situation in the Sahel “demonstrates the link between climate change and migration”; many people fleeing conditions in the Sahel were actually “climate migrants”.

Given Niger’s existing low level of emissions, he said, the country was focused on adaptation and remained committed to addressing the consequences of climate change.

Karin Goebel, Head of the Economic Department at the German Permanent Mission, argued for a “paradigm shift from the traditional response-focused humanitarian system towards a forward-looking one, able to anticipate crises and disasters”.

She believed early financing and action can “save lives, avoid unnecessary suffering, and lead to more effective humanitarian preparedness and response”.

Dr Roselyn Akombe, Chief of Policy and Guidance at the UN Department of Political and Peacebuilding Affairs, shared insights from the 2018 Climate Security Mechanism that was launched together with UNEP and UNDP.

She emphasized that understanding local contexts and the ways in which climate change affects women and youth was key to effectiveness and sustainability.

Richard Blewitt, IFRC Permanent Observer at the UN, called for adaptation actions to be scaled up, along with “long-term durable solutions, multi-year planning and financing” so that both international and local organizations can better support communities.

The ICRC’s Permanent Observer and Director-General Designate, Robert Mardini, said the International Committee was focused on three areas: ensuring that “critical systems” were in place to strengthen people’s resilience to climate risk, creating coherence between humanitarian, development and peace actors, and ensuring that climate finance is available in countries experiencing “conflict, violence or fragility”.

Among locally driven solutions that address complex emergencies, the IFRC told the meeting, were “anticipatory mechanisms such as forecast-based financing and action designed by the Climate Centre and now being implemented by National Societies and the IFRC around the world.”

Those most vulnerable to climate change were not necessarily living in areas exposed to the greatest hazards, she said, but where capacities to absorb and adapt were lowest; conflict reduced it yet further.