Blog: Geoengineering – there may be trouble ahead 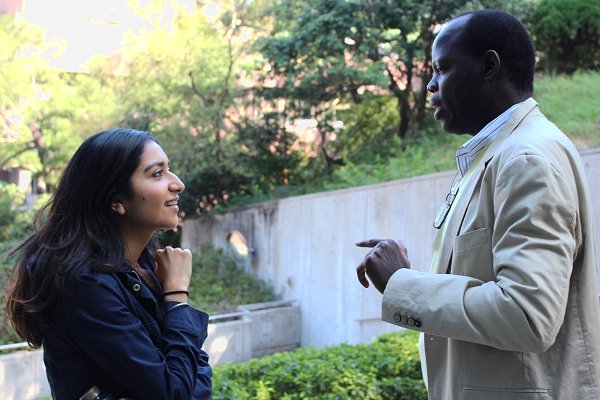 (This blog appeared first last week on the website of the Carnegie Climate Governance Initiative. It has been edited slightly here for length.)

What would happen if someone had the option to spray ‘magic dust’ in the atmosphere to bring down the global temperature, but with potentially dangerous consequences?

The way people respond to this question isn’t always obvious – and young people are no different.

Solar geoengineering is the idea of releasing aerosols into the stratosphere to reflect sunlight, thereby reducing global temperature.

But it would not address other climate issues such as ocean acidification. And it could have unknown and unequal impacts on global weather patterns, such as changes in rainfall, with wide-ranging impacts on sustainable development.

Deciding whether or not these technologies might ever be used, or how, is a big governance challenge, which young people need to be part of. How do we encourage young people from around the world to get involved?

The Climate Centre has developed several games to help people tackle the tough questions posed by a changing climate. We have recently been refining one of the most successful to include geoengineering, Altering the Climate.

On the sidelines of the UN Climate Summit in New York last year, we challenged a group of young climate leaders from around the world to try it out.

The game challenges players to decide how they would allocate resources to balance the need for protection from an increasingly extreme climate with the need for societal development and progress.

Over time the game made these decisions more difficult, adding more uncertainty to the mix. At one point they were given the option to deploy solar geoengineering. The response surprised us.

One group had all but decided they would not geoengineer, until they noticed another group was about to pull the trigger. All of a sudden, without consultation, one of the group members jumped up to deploy geoengineering before the other group got there first.

This remarkable action served as a memorable demonstration of the need for climate governance.

Without sufficient rules in place, any one group could act without consulting others, with enormous consequences for the rest of the world. And we see this mirrored in the real world, where key actors like the humanitarian community and the most vulnerable people they serve have been largely absent from geoengineering deliberation.

To help participants surface insights from their experience, they were invited to observe cartoons placed around the room and discuss the ideas they evoked.

Some participants came up with original captions for the cartoons, while others shared their interpretations.

For example, a participant related one cartoon to potential negative or unexpected impacts of geoengineering; someone else brought up how it could be interpreted in the opposite way.

This invited a more in-depth conversation about which unknown is worse: the impacts of climate change or geoengineering.

Afterwards participants reflected on how few of their peers really understood solar geoengineering in terms of its implications, or how feasible it was becoming for any individual or group to undertake.

They were eager to engage, to help educate their peers, and to have a say in how geoengineering would be governed.

One reflection that stood out was their appreciation for an interactive game process in which participants actively think and make decisions in order to succeed.

The rich, visceral emotional depth that emerges through game dynamics is a good complement to the intellectually textured decision-making conundrum experienced by players, highlighting trade-offs and enabling exploration of how things may evolve in real-world scenarios.

As the debate around solar geoengineering rises up the agenda, one question is whether we might need a new game to further explore the issue.

The complexity of solar radiation management is such that it might be unreasonable to expect a single game to adequately represent all the relevant issues – involving science, technology, policy, governance, ethics, and humanitarian implications.

Yet might it be helpful design a new game to communicate more nuances about these and other proposed technologies?

We think the best option may be to continue to use a more simple game system as a platform to awaken the curiosity and engagement of young stakeholders, building their appetite to ask questions that can be answered in subsequent activities. But we are open to ideas.