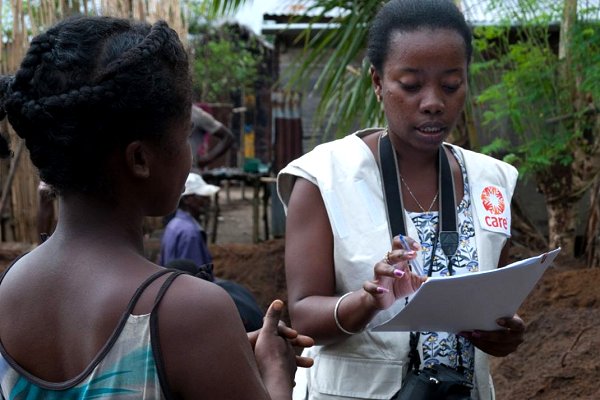 A new report from CARE International says the African continent was the setting for all but one of ten under-reported crises last year, “ranging from drought to displacement, conflict, epidemics and food insecurity” – climate change, to some degree, had a hand in all.

“From Madagascar to Lake Chad to North Korea, the majority of crises ranked in our report are partly a consequence of declining natural resources, increasing extreme-weather events and global warming more broadly.”

Yet the report quoted data showing that at end of last year at least 2.6 million people were affected by drought there while more than 900,000 were in “immediate need” of food assistance; Madagascar has the world’s fourth highest rate of chronic malnutrition, with half children under five suffering from stunting.

“The increased public attention for the global climate crisis is encouraging, but we must ensure that the conversation is not limited to the global North and much-needed transformations there,” Austin added.

“It is shocking to see how little media reporting there is about human suffering related to global warming in the South, the lack of political action to address this injustice, and solutions applied to ease the burden for communities.”

A CARE press release said the report “challenges media institutions, aid organizations and policy-makers to make conscious choices about their priorities”, adding that in most of the countries Suffering In Silence focuses on this year – its fourth – the “humanitarian response is also chronically underfunded.”

After Madagascar, in ascending order of press coverage, it lists “brutal conflict” in the Central African Republic, where “[h]eavy seasonal rainfall and flooding have complicated the delivery of humanitarian aid” and where also an estimated 2.6 million people are in “desperate need of humanitarian assistance”.

It then describes Zambia, recently the focus of an IFRC appeal, as on “the front line of climate change,” with an estimated 2.3 million people in the country in urgent need of food assistance.

Next in order come food-security crises in Burundi, Eritrea and North Korea.

Kenya, says CARE, is “[t]rapped in the middle of floods and droughts,” with more than 1.1 million people without regular access to food, while a “silent humanitarian catastrophe” centred on escalating violence in Burkina Faso has affected more than a quarter of the population, or 5.2 million people.

“Burkina Faso remains vulnerable to climatic shocks related to changes in rainfall patterns and faces an acute food and nutrition crisis [says CARE, and this] is a direct result of a major drought, which affected the Sahel region in 2017/18.”

In Ethiopia, Suffering In Silence says, nearly 8 million people suffer from “a serious level of malnutrition” because of disaster and displacement.

The region that received relatively the most media attention was the Lake Chad Basin, where conflict, displacement and hunger has left nearly 10 million people in need of humanitarian assistance.

CARE says its latest analysis included Spanish- and Arabic-language online media coverage as well as English, French and German; results are similar to previous years, with six out of the ten crises having already appeared in the ranking at least twice in the past three years.

“Each one is one too many,” the report says. “Suffering In Silence serves as a call for the global community to speak up for people in crises who are otherwise forgotten.”

It includes a wide range of recommendation to governments, policy-makers, the private sector and the public.

Its principal suggestion to aid agencies, which it says increasingly fill coverage gaps left by “dwindling news budgets”, is that “it is important to recognize the need for localized angles when pitching stories not necessarily in line with their agendas.

“Humanitarian organizations have a duty to promote the role of local and national actors and acknowledge the work that they carry out.”

The chronic food crisis in Madagascar received the least amount of media attention in five major languages in 2019, according to this year’s Suffering In Silence report from CARE International. (Photo: CARE/Clément Radar)