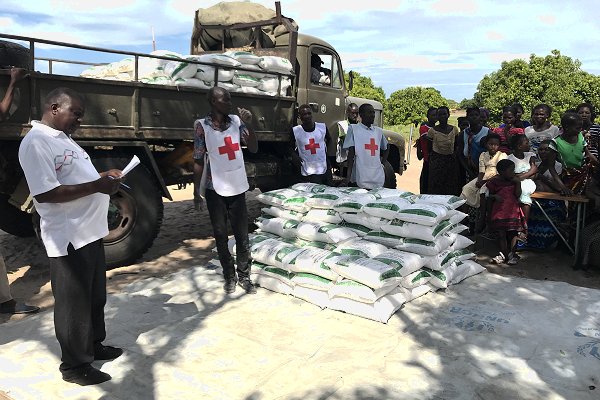 (This story appeared first yesterday on the website of the Thomson Reuters Foundation. It has been edited slightly here for length. The IFRC last October launched an appeal for 3.5 million Swiss francs to assist nearly 60,000 people facing food insecurity in Zambia. )

From drone-mapping in Mozambique to community radio weather programmes in Zambia, aid agencies are innovating to help millions of people in drought-ravaged southern Africa prepare for climate threats and produce enough food on a warming planet.

A business-as-usual approach to providing aid will no longer do, humanitarian officials said.

“We cannot see food insecurity through an emergency lens alone,” said Michael Charles, Head of the Southern African office for the IFRC.

“We will always be chasing shadows if we don’t take a step back, go back to the drawing board, and work as a collective on long-term solutions with more impact,” he added.

Failing to do so would be “devastating”, he told the Thomson Reuters Foundation.

Over the past year, much of the central and western parts of Southern Africa have experienced their lowest rainfall since 1981, according to the United Nations.

‘We will always be chasing shadows if we don’t
take a step back, go back to the drawing board,
and work on long-term solutions with more impact’

Lola Castro, WFP’s director for the region, said last week a “silent catastrophe” was playing out.

The humanitarian innovation required to address it includes the use of new technology like drones but also simple solutions that deploy limited resources effectively, said Bettina Koelle, a researcher with the Red Cross Red Crescent Climate Centre.

“Aid groups need to engage in constant dialogue with those most affected by climate shocks to understand what it is they need,” she said. “There are no quick fixes.”

Jesse Mason, an atmospheric scientist with WFP, and his team use long-term meteorological forecasts to predict weather patterns up to six months ahead and to finance humanitarian responses up front.

Bringing these projections to government, donors and farmers can stop “the vicious cycle” of responding to climate shocks and redirect energy to better preparation, Mason said.

Zambia’s government, meanwhile, has partnered with the United Nations Development Programme on a seven-year project aimed at safeguarding farmers’ incomes against climate threats.

So far 170,000 small-scale farmers across 16 districts have been involved in the project, some via extension officers on motorcycles who bring new information directly to them.

In Zimbabwe, Zambia and Malawi, insurance schemes for 140,000 rural households have been rolled out by the Technical Centre for Agricultural and Rural Co-operation (CTA), which is backed by African, Caribbean, Pacific and European states.

Farmers sign up via their mobile phones, with low rainfall measurements triggering payouts they can use to purchase new seeds to replace crops destroyed by drought.

“People are tired of hearing about climate problems,” said Oluyede Ajayi, a senior programme coordinator for the CTA.“We need solutions – especially farmers whose families, livestock and livelihoods depend on them.”

The unpredictability of climate change makes data and information from the ground even more valuable, said Koelle.

WFP has used drones to map vulnerable parts of Mozambique and Madagascar ahead of the upcoming cyclone season so they know where people are and how to get aid in, said Castro.

The UN children’s agency UNICEF has said drones hold great promise for delivering medical supplies to rural areas and responding to disasters like earthquakes and floods, with their potential being explored from Namibia to Kazakhstan.

WFP is also working with farmers to improve post-harvest storage facilities, providing people with food vouchers to spend locally rather than bringing in supplies, and encouraging people to switch to more drought-resistant crops.

Innovations are also being tested in other parts of Africa. Global aid group Action Against Hunger, for example, has created a “Pastoral Early Warning System” that uses satellite data to track drought and anticipate risks by measuring plant growth and surface water in the semi-arid Sahel, which skirts the Sahara desert.

Koelle highlighted the need to consider where the limits to adaptation might lie. Where they are crossed, it might be necessary to put in place social welfare programmes, such as cash transfers for women-headed households, to ease suffering.

Ensuring farmers have good links to markets to sell their harvests will help maintain their livelihoods and give them “choices about how they want to use their money”, he added.

“This gives people dignity and space to thrive, and to break out of the cycle of food insecurity,” he explained.

Zambia Red Cross trucks deliver food sacks to remote villages in the west of the country last November. They sit on a plain that would normally be flooded during the rainy season, but not this year. More than 2 million people in Zambia faced food insecurity at the end of last year. (Photo: Sanja Gohre/IFRC)