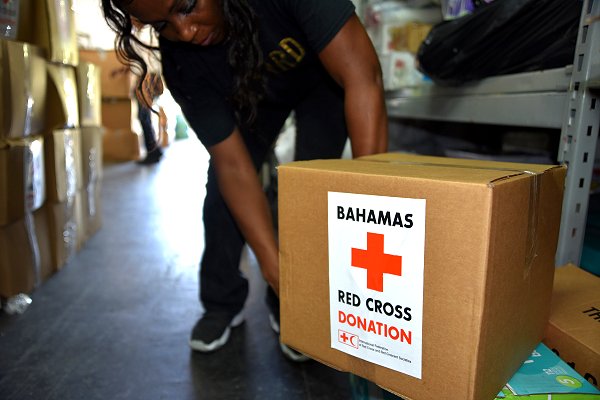 (This story appeared first last month in French and English on the news service of Agence France Presse; it has been edited slightly here for time references.)

Before Hurricane Dorian hit the Bahamas in September, Red Cross officials there thought the island nation was well-prepared to weather the storm, with strong building codes, numerous shelters and pre-positioned aid.

“We were prepared for hurricanes as we knew them to be [but] we could not have anticipated the strength of Dorian,” Terez Curry, head of the Bahamas Red Cross, told AFP during an international conference of Red Cross and Red Crescent societies in Geneva.

“It is being seen as a climate change disaster,” she said.

As climate change continues to push up temperatures globally, it is creating and strengthening risks of natural disasters, with dire humanitarian consequences.

While it can be difficult to attribute Dorian or other specific storms directly to climate change, experts largely agree that the warming trend dramatically increases the risk of more frequent and stronger weather-related shocks.

“Climate change is a magnifier of risk,” he said, pointing for instance to more frequent, deadly heatwaves in Europe, raging forest fires in the United States, Australia and even recently in Sweden, near the Arctic circle.

“And the intensity of the most intense cyclones is going up,” he said. That certainly was the case when Dorian hit the Bahamas, Curry said.

More than 7,000 inhabitants of the hard-hit Abacos or Grand Bahama islands lost their homes, with 75 per cent of all buildings destroyed in some areas in the Category 5 storm’s path, according to the UN.

“Before Dorian, we thought our roofs were fine, our building codes were adequate, our preparation to put together a hurricane package and to move to a shelter was adequate,” she said. “Now we are post-Dorian and all of that has to change.”

The Bahamas tend to see multiple hurricanes each year, and have had their share of Category 5 storms pass through in the past, but Dorian, which followed a summer with record temperatures, carried a punch that took everyone by surprise.

“We really think we are feeling the effects of climate change,” Curry said. Climate change is among the top issues at the conference, which gathered some 3,000 participants from around the world in Geneva.

It comes as nations are meeting in Madrid to finalise the rulebook of the 2015 landmark Paris climate accord, which aims to limit global temperature rises to “well below” two degrees Celsius and to a safer cap of 1.5°C if possible.

While the Madrid talks remained bogged down in politically charged wrangling, delegates in Geneva called for global recognition of the humanitarian impacts of climate change and concerted efforts to address the growing risks.

A draft resolution called on countries to ensure their laws and policies are “climate smart”, meaning more focused on building resilience, prevention and disaster risk reduction.

The Red Cross Red Crescent is also appealing to donor countries to allow humanitarian funds to be released before a disaster hits, to boost preparedness and thereby reduce suffering and economic loss, Van Aalst said.

“There is a need to invest more in prevention rather than just more response,” he said, stressing that “we already cannot cope, and the risks are going to continue to go up. Just preparing for even more response is not good enough.”

Bahamas Red Cross volunteers preparing relief supplies for people affected by Hurricane Dorian; one of the most intense storms in the islands’ recent history, it triggered a rethink about the levels of preparedness and response that will be necessary in a warmer and more hazardous world. (Photo: BRC via IFRC)