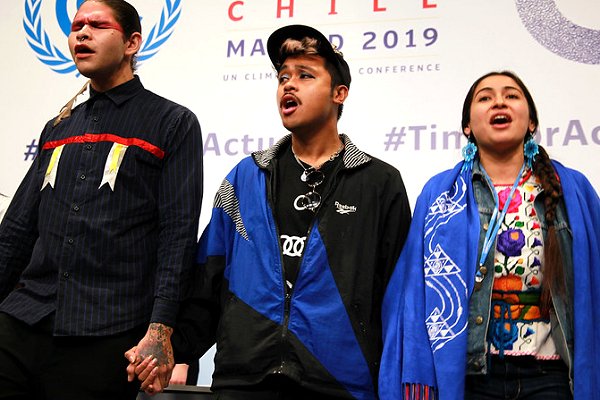 (This story appeared first late last month on the website of the Thomson Reuters Foundation. It has been edited slightly here for length and time references.)

Standing before a captive audience at last month’s climate change conference in Madrid after entertaining them with a dance in her traditional Pacific island costume, 21-year-old Tabita Kaitamakin Awira Awerika’s smile turned to angry tears.

The student from Kiribati spoke of her anguish at the threat to her low-lying atoll nation from rising sea levels and ferocious storms – and the determination of her people not to let global warming chase them from their “beloved motherland”.

“I am very sad to say that as the youth of many developed nations are enjoying their daily activities, our fellow youth in Kiribati are worrying about what the future holds for us,” she told an event on the sidelines of the UN talks.

“My leaders have voiced these concerns to the global community over and over but no one is listening – are we that insignificant for our cries to fall on deaf ears?”

Emotional exhortations like this are being heard more often at the annual climate summit, especially from young people, as climate change fuels extreme weather, glaciers melt, and the world’s oceans creep inexorably higher.

In Madrid, veterans of the COP meetings – known as a place where suited officials spar over complex agreements – said they had never seen such an outpouring of grief, anxiety and sorrow.

Bill Hare, founder of climate science think-tank Climate Analytics, told US news show Democracy Now! he had seen more tears in Madrid than at the previous 24 summits, dubbing it “the crying COP”.

Representatives of small island states were “almost panicking” at the prospect of their homelands disappearing under the waves, while young people were “angry and upset” at a lack of action by politicians, he said.

During two fractious weeks of talks, a handful of major polluting states resisted pressure to ramp up efforts to combat climate change, angering smaller countries and a growing protest movement that is pushing for emergency action.

The climate change talks have experienced a “big shift” away from formality in recent years, said Ashlee Cunsolo, director of the Newfoundland-based Labrador Institute of Memorial University and an expert on “ecological grief”.

She told the Thomson Reuters Foundation people were increasingly “refusing to separate science and feeling. More and more, they are not embarrassed and not ashamed to share the emotions they are experiencing around these changes.”

One key driver is rising exposure to climate and weather-linked disasters, whether Australia’s bushfires, flooding in the United States or Hurricane Dorian in the Bahamas, she added.

“The lived experience that people have and are sharing publicly on social media and in media articles has so far outstripped the research that we have,” said the academic who co-authored a study on the subject, published in April 2018.

The paper identified ecological grief as “an underdeveloped area of inquiry” and warned it could “become more common as climate impacts worsen”.

Yet while community groups have sprung up to help people cope with their feelings, and some health professionals are developing guidelines on mental health and climate change, efforts to quantify and tackle the phenomenon are lagging behind, Cunsolo and others said.

“If people don’t hear about it and don’t talk about it, and it only grows within, then that is a recipe for disaster,” said Pablo Suarez, Associate Director for Research and Innovation at the Climate Centre.

At a parallel event in Madrid, he ran a workshop introducing development professionals to the concept of “climate darkness” – a term he prefers to grief which points to something that has already happened and is not a springboard for action, he said.

“A little bit of light can undo darkness,” he said. “Emotional pain is a signal: these tough times are full of opportunities for heroic generosity and proactive humanitarian deeds.”

As a global network of volunteers, the Red Cross Red Crescent is aware of the stress climate-related crises put on its humanitarian workers, as well as those directly affected, and plans to start providing better psychological support for them, Suarez said.

He said one reason why major climate change events like the COP fell short of public expectations was that they are “devoid of inspiration”.

“Why are COPs designed to discard the emotional richness needed to make us aim for more? Yes, climate negotiations are deadly serious, but they shouldn’t be deadly tedious,” he added, calling for an injection of art and humour.

In Madrid, Marie Christina Kolo, a young eco-feminist from Madagascar, welled up as she spoke of village girls being pushed into early marriage because their parents could no longer earn enough from fishing in the African island nation’s warming seas.

“I hope [the negotiators] will not only consider data and percentages, but they will consider our lives,” she told journalists.

Young climate activists at the Greta Thunberg press conference at COP 25. Veterans of UN climate talks said they had never seen such an outpouring of anxiety and sorrow over climate change as in Madrid in December. (Photo: UN)