Struggling to survive climate impacts and conflict in Afghanistan 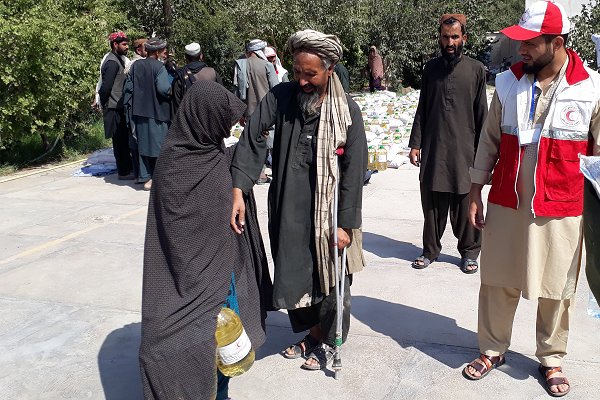 Karimullah (his first name), 30, from Helmand province, is a single father with a six-year-old daughter who now lives in a small thatched house with his brothers.

Successive drought and heavy floods combined with lingering conflict have wrecked their harvest and pushed them all to the edge of survival.

“My family are going through a very tough period, but life was not always like this,” says Karimullah. He used to live in the Kabul Comp area of the capital, where he was employed in the bakery and earned the equivalent of US$ 50 a month, just enough to get by on.

“The money was not a lot but it covered meals, transport and clothes for my family,” explains Karimullah, an amputee caught in the crossfire of war who speaks to us from his wheelchair.

Now unable to get a job, Karimullah survives with the help of his brothers who work on local farms in Helmand; that and in-kind assistance from friends and support from the Afghan Red Crescent (photo).

‘With the worst of the winter looming,
we cannot emphasize too strongly
the need to help people re-establish their lives’

The cooking oil, beans, flour and milk are great, he says, as long as the supplies last. But Karimullah – one of the legion of innocent Afghan civilians who have born the brunt of the decades-long conflict – says they need long-term help from the government and Red Crescent.

“We lived a relatively normal life before I became disabled, but now everything has gone,” he says.

“The political situation is very bad here. The community is living in dire conditions and our children are out of school due to the sustained fighting.

“Now drought and floods have claimed as many people as conflict, damaging our houses and destroying our livelihoods.”

Barely were they starting to recover from the latest drought than they now face the extreme cold and snow of winter.

Since March 2018 the Afghan Red Crescent has been helped by the European Commission and the Red Cross societies of (alphabetically) Canada, China (Hong Kong), Japan, Monaco, the Netherlands, Norway, Sweden, the UK and the US.

But the appeal is only 47 per cent covered, and it’s now seeking to close the funding gap with a further 4.4 million Swiss francs to support thousands more people with potentially life-saving assistance.

In October it was estimated that more than half a million of the most vulnerable people in Afghanistan will still need help to restore their livelihoods and build resilience against the combined impacts of conflict and climate.

“With the worst of the winter looming, we cannot emphasize too strongly the urgent need to support people to re-establish their lives and rebuild their livelihoods,” says Pierre Kremer, Head of the IFRC Country Office in Kabul.

The Red Crescent Society has unique countrywide access to people in need: its volunteers have been distributing food parcels, household essentials, tarpaulins and family tents, and providing first aid.

Widely recognized as neutral and impartial, the authorities in Kabul have asked the National Society to help people in areas where the government itself cannot operate, which the Red Crescent does, of course, while keeping a very close eye on the safety and security of its staff and volunteers.

Kremer adds: “We have managed to deliver some emergency assistance, but could do so much more to build the resilience of people like Karimullah.

“A longer-term approach centred on resilience – water and sanitation, health, climate-smart cultivation, and cash – could help address some of the underlying causes of people’s vulnerability.

“But we must close the finding gap to be able to do more.”

A recent distribution of humanitarian relief by the Afghan Red Crescent. The National Society believes it could do more to help people countrywide facing the dual impacts of climate and conflict with a long-term approach and better funding. (Photo: ARCS)