Development and Climate Days 2019: ‘Grass-roots ideas need to shape climate policy if it’s to be effective’ 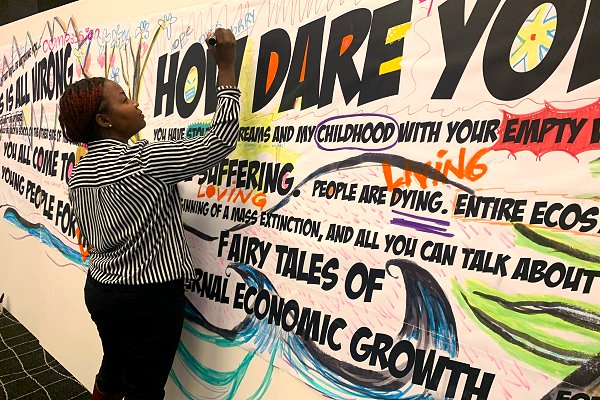 (This story appeared first on the website of the Thomson Reuters Foundation earlier this week.)

From young “climate warriors” planning to improve Lagos slums with solar lighting and cleaner drains to Bangladeshi researchers working with vulnerable villagers at risk from rising seas, poor communities are generating a huge amount of knowledge on how to live better on a warming planet.

But that bottom-up expertise is not being utilized by governments to shape climate change policy at the global level – one key reason why that current system is failing to meet the needs of the most vulnerable.

The Development and Climate Days event, on the sidelines of the UN climate talks in Madrid, closed with a strong message that international efforts to help the world’s poorest adjust to more extreme weather and rising seas should not neglect what those communities have already learned.

Bisola Akinmuyiwa, who works with Slum/Shack Dwellers International in informal settlements in Lagos, said government officials were disbelieving when they heard residents had devised their own plans to avert flooding or provide their homes with clean energy.

“We have our community-led, accurate data…they should use our data to plan with us, not for us,” she said. “Let them support us with that.”

The 2015 Paris Agreement, whose final rules are due to be hammered out in Madrid this week, states that “adaptation action should follow a…participatory and fully transparent approach, taking into consideration vulnerable groups, communities and ecosystems”. But in many cases, that is not happening, said climate experts at the conference.

“We want to bring in a paradigm where we say many locals make the new global,” said Sheela Patel, founder and director of the Society for the Promotion of Area Resource Centres (SPARC) in Mumbai.

“We don’t need a cookie-cutter approach. We need scientists and people with technology to come and work with us, not throw things at us,” said Patel, who is also a member of the Global Commission on Adaptation.

The World Bank, which is doubling its finance for adaptation over the next five years to some US$ 50 billion by 2025, will boost its efforts to get more money down to the local level, including through community-based funds, said Louise Cord, the bank’s global director for social development.

“It’s not just giving the money; it’s empowering those communities to be in the driver’s seat,” said Cord. “We also need to give them data and information – yes, communities know better than we do about the impacts of climate change, but they can’t always articulate them.”

The aim is to give them tools such as smartphones so they can monitor the situation and work out the long-term implications of climate change they need to address, she added.

Patel and Saleemul Huq, Director of the International Centre for Climate Change and Development, said poor communities on the frontlines of climate change often have good ideas about how to protect themselves but need the support of government authorities – and in some cases businesses – to put the ideas into practice.

“My country of Bangladesh is the most climate-aware country in the entire world. People on the streets can tell you all about climate change,” said Huq.

The best way to support them is by helping developing countries develop their own expertise rather than sending in foreign experts to put together a climate plan on their behalf, he added.

Patel said that with the right support, slum-dwellers can do the job of building their resilience much faster and more effectively than outsiders.

“If we are smart, we can leapfrog,” she added – whether in clean energy, green transport or sustainable food production.

Akinmuyiwa said young people in her community want the chance for dialogue with those higher up the political chain, to bring fresh ideas to the table and to find ways of working together.

“Yes of course, we [young people] are impatient,” she said. “But we are patient and so sweet to deal with when we understand what are the reasons.”

A D&C Days participant helps the event’s Greta comic strip come to life last Sunday. At the end of a year that has seen several serious warnings about emissions, the meeting seeks to encourage participants to “interact, challenge existing thinking and generate new ideas, leaving no one behind”. (Photo: social media)