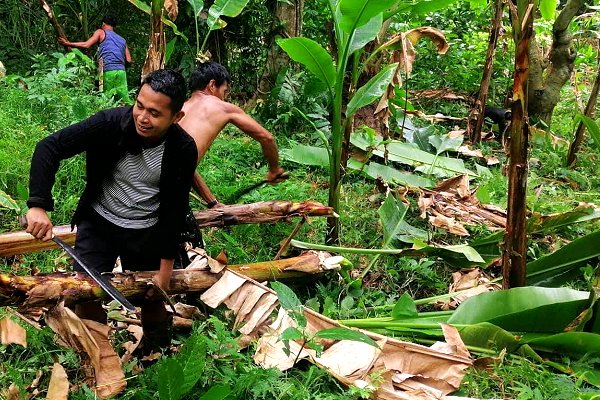 (A version of this story appeared earlier today on the FbF website of the German Red Cross.)

Typhoon Kammuri, known locally as Tisoy, is expected to hit the Bicol region of the Philippines overnight tonight, with sustained core wind speeds of 140 kph and gusts up to 170 kph.

As part of the forecast-based financing (FbF) project in the country, the German Red Cross (GRC) has been supporting the Philippine Red Cross (PRC) and local people in preparations to deal with the typhoon’s impact.

These activities are being undertaken with support from the IFRC country office and an imminent-disaster DREF allocation of nearly 50,000 Swiss francs was activated yesterday.

The FbF team has been monitoring the situation over the past week and has deployed staff and volunteers to communities at risk to assist people in protecting themselves and their livelihoods from the impacts of Kammuri.

The FbF project in the Philippines uses ‘impact-based forecasting’ – overlaying forecasts with indicators such as building type, poverty and the effect of past typhoons – to identify those areas in which the most severe impact is predicted.

The impact-based forecasting model was developed with support of the 510 data initiative of the Netherlands Red Cross.

With GRC support the Philippine Red Cross in Camarines Norte province, for example, has been strengthening houses in two communities by tying down roofs.

Shelter-strengthening kits and instruction manuals were developed earlier this year in collaboration with construction experts.

They are also supporting the evacuation of livestock in two communities that lost many animals during Typhoon Usman a year ago; the team has identified a elevated safe site, 200 metres from the shelter for people, and employed 17 community members to fence off the area.

The livestock evacuation is being carried out in close collaboration with the provincial authorities who are providing trucks.

On Catanduanes island province, early protective harvesting of abaca trees in five communities has been supported, employing more than 100 community members and ensuring some income for the first months after the storm.

In past storms, when abaca trees were destroyed this not only meant significant losses for farmers but also serious loss of income for those workers normally employed in processing their fibre.

The Philippine and German Red Cross, the IFRC and local authorities have developed the Philippines early action protocol for typhoons over the past year in a pilot project that is part of the Action Plan on Humanitarian Adaptation to Climate Change, funded by the German Federal Foreign Office.

Farm workers on Catanduanes island province protectively harvesting abaca trees in five communities supported by FbF in the path of Typhoon Kammuri, known locally as Tisoy, ensuring some income after the storm passes through. (Photo: PRC-GRC)