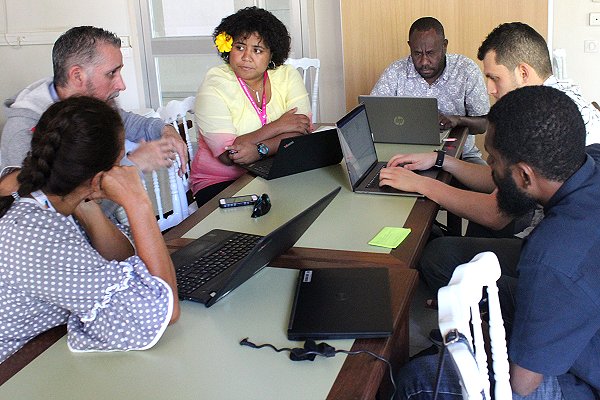 (A version of this story first appeared on the website of the Pacific Meteorological Desk Partnership last Tuesday.)

Annual PICOF meetings are organized by the Secretariat of the Pacific Regional Environment Programme, the World Meteorological Organisation and the Pacific Islands Climate Services Panel.

The Noumea event, hosted by Météo-France, brought together meteorologists, agriculturalists and other experts to develop a regional statement on the outlook for climate and cyclones for the upcoming season.

Development of agrometeorology bulletins and early warning systems, climate training packages for farmers, videos, social media posts, and the integration of traditional knowledge with scientific information were among the priorities identified by participants.

“Improving the use of seasonal climate information in decision-making by farmers can reduce losses by increasing preparedness for disasters,” said Sunny Seuseu, Acting Manager at the Climate Information Services for Resilient Development in Vanuatu project.

“This requires not only that farmers can access outlooks provided by their meteorological service, but also that they understand what the outlooks are telling them and what early actions they can take to prepare.”

In Vanuatu, field schools on climate are seen as an effective way of demonstrating how climate information can be applied by farmers.

PICOF-5 was the last such meeting to be chaired Andrew Tait of New Zealand’s National Institute of Water and Atmospheric Research.

The Pacific Islands Climate Services Panel will now be jointly chaired by Simon McGree, a climatologist at the Australian Bureau of Meteorology, and Olivia Warrick of the IFRC and Climate Centre.

Anahit Hovsepyan, a specialist from the WMO’s Climate and Water Department, noted that there are now 20 regional climate outlook forums worldwide, and WMO “has been continuously guiding and supporting their growth and expansion”.