IFRC Governing Board approves , with climate top of list of global challenges 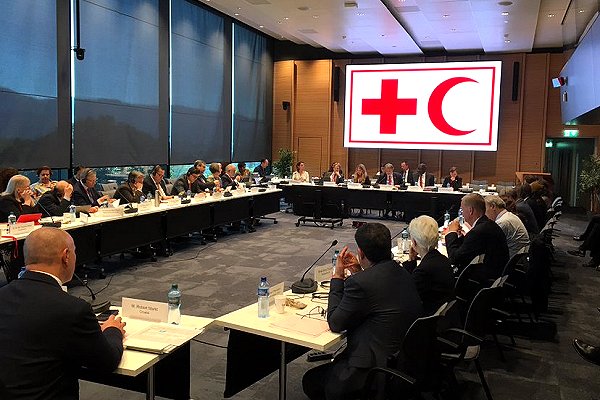 The IFRC’s Governing Board (pictured) last week approved the organizations’s new Strategy 2030 that “proposes an urgent shift of leadership and decision-making to the most local level – placing communities at the very centre of change”.

Strategy 2030 now goes for approval to the General Assembly in Geneva in December.

It places climate change at the head of a list of five major global challenges facing the Red Cross Red Crescent Movement, along with: crisis and disasters; health; migration and identity; and values, power and inclusion.

Seven transformations, led by “strong local actors”, make up the complete platform for change outlined in the strategy, which is the fruit of an extended consultation with nearly 10,000 people in 191 countries.

Presenting the strategy document to the Governing Board last week, IFRC Secretary General Elhadj As Sy said: “We need to instill hope in places where despair is the norm. We need to be humble, to listen and learn.

“We need to lead in an inclusive way without leaving anyone behind, and while we don’t take sides we do take a stand.”

Strategy 2030 says the global challenges emerging from the consultation process “are inseparable from each other and are heavily influenced by trends identified in our Global Thematic Futures Report.”

In the section on climate change it says this is “one of the biggest risks, and a threat multiplier, facing humanity in the coming decades”.

“At the same time, these events will be increasingly complex, compounded by poverty, disease, displacement, and conflict, and interacting with urbanization and population growth, putting increased pressure on scarce natural resources, including the demand for food and water.”

The IFRC Governing Board meets in Geneva last week. The session was opened by the organization’s President Francesco Rocca. (Photo: IFRC via Twitter.)