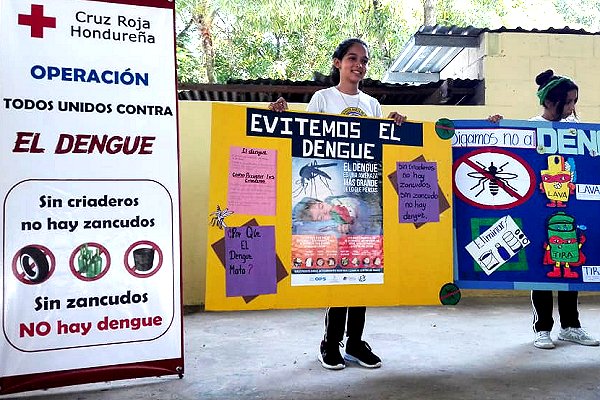 (This story is an IFRC press release first issued Friday in Panama City and Geneva.)

As dengue spreads rapidly across Central America, the IFRC is scaling up emergency assistance to help countries contain the mosquito-borne viral disease.

In Honduras, at least 71,200 people have been affected by the disease, making it the worst outbreak in the country’s history. Nearly one quarter of the cases reported were classified as severe dengue and 65 per cent of the 128 deaths so far are children under 15.

Dr Maria Franca Tallarico, Head of Health at IFRC’s Regional Office for the Americas, said: “Dengue is endemic across the Americas, but what is very concerning in this outbreak is that the majority of the cases and deaths are occurring in children under 15.

“This is due to a lack of immunity in young people to the deadliest of the four strains of dengue currently circulating in the region.”

A combination of seasonal rains and warming temperatures are being blamed for dengue’s rapid spread – creating more stagnant pools that are perfect breeding grounds for mosquitoes. There are rising concerns that this will make the outbreak harder to contain.

According to the World Health Organization (WHO), rising global temperatures and shifting rainfall patterns linked to climate change could significantly modify vector-borne diseases and their effect on human populations – making epidemics more difficult to predict and control.

Teams of Red Cross volunteers in affected Central American countries have been supporting government efforts to slow the outbreak – providing door to door awareness-raising about the disease and how to prevent it.

With their unique access to affected communities, the Red Cross volunteers are helping to clean up mosquito breeding sites or accompanying health workers to identify cases.

Dr Tallarico said: “The size of this outbreak is unprecedented across Central America. Dengue is a disease that affects the most vulnerable – those who live in places where there is poor sanitation and where mosquitoes thrive.

“But the disease can be contained if governments and communities work together to raise awareness, access medical care and clean up the environment. This is what the Red Cross teams across affected countries are focused on doing.”

The IFRC has launched a regional appeal seeking a total of 2.9 million Swiss francs to support National Red Cross Societies in Central America to deliver assistance and support to 550,000 people for 12 months.

The appeal will focus on community health, water and sanitation and promoting behaviour changes that prevent the decease.

Dengue cases have increased thirtyfold over the last 50 years, according to the WHO. As one of the world’s fastest growing diseases, dengue is endemic in 100 countries, infecting 50-100 million people a year.