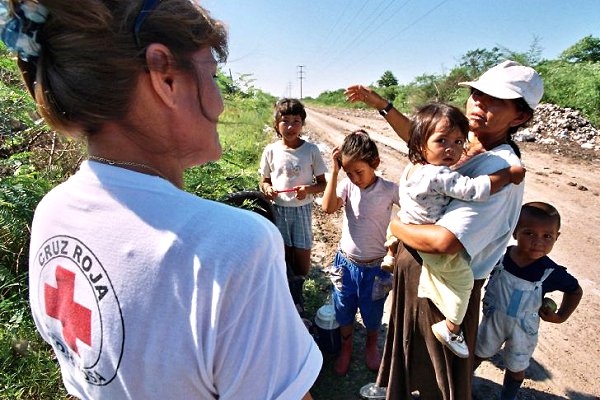 The latest in a series of series of background papers commissioned by the Global Commission on Adaptation to inform its 2019 flagship report argues that better integration of social protection and climate adaptation is “critically important for addressing climate risks”.

Social protection – especially through cash transfers, public works and programmes to guarantee employment – is growing and serving more people in low and middle-income countries, it says.

Countries in the global South currently invest more than US$ 500 billion annually in social protection, while globally the figure exceeds US$ 2 trillion.

Nearly one third of the population in low and middle-income countries benefit from social protection that flows increasingly to the poor and the vulnerable, “making social protection vitally important for climate justice goals too,” according to Climate Resilience Through Social Protection, which includes input from the Climate Centre’s Senior Technical Adviser, Cecilia Costella.

It adds: “Few other social or climate policy instruments have the reach, diversity, resources, or policy-objective overlap that social protection and climate adaptation do.”

Social assistance has been firmly linked to positive outcomes that relate to well-being and resilience such as food and nutrition, household assets of various kinds, health and sanitation, literacy and education, even migration and crime.

‘Social protection is vitally important
for climate justice goals too’

But integrating social protection with climate resilience is not without challenges: programmes for assisting the poor and vulnerable remain fragile in many countries in the South both because of institutional gaps and the need for additional finance.

In the developed world, political actors occasionally challenge social protection programmes, seeing in them the roots of long-term dependence at individual level and fiscal crisis at national level, and there is only limited evidence of them having more far-reaching, transformative impacts on climate resilience.

The paper advocates “three key shifts in the design and delivery of social protection” that will generate better outcomes as well as climate resilience: better institutional coordination, the integration of climate risk management, and building synergies with other programmes for risk management such as insurance.

Realizing them is possible, it argues: additional finance, a better knowledge base, and effective programme implementation all “help realize the shifts needed in current social protection programmes for more positive and far-reaching climate resilience outcomes”.

The Formosa branch of the Argentine Red Cross was among those involved with assisting people in the 1998–2002 socio-economic crisis in the country (pictured). More recently, the government’s doubling of benefits from social protection after floods and wildfires in the early 2010s “supported workers, students, pregnant women, retirees, pensioners, unemployed people and veterans”, and is among the case studies in a briefing paper illustrating how countries have expanded social protection in response to climate hazards. (2003 file photo: Daniel Cima/Argentine Red Cross-IFRC)