Risk-informed Early Action Partnership – ‘REAP’ – launched at #climateaction summit: ‘Let us work together for a safe world for our future generation’ 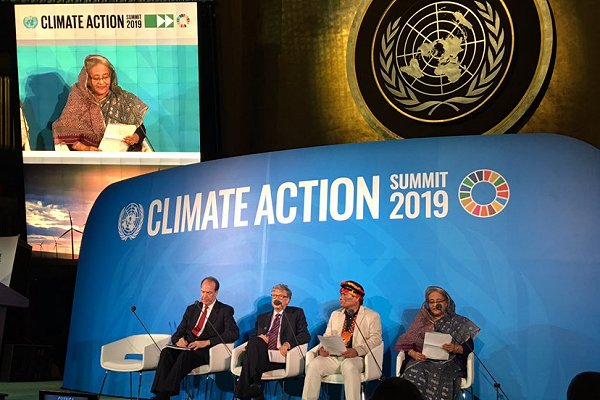 The much-heralded Risk-informed Early Action Partnership (REAP) intended to protect a billion people in the developing world from extreme weather has been launched at the UN General Assembly in New York.

Its secretariat will be hosted by the IFRC in Geneva, and organizers say it will deploy data, evidence and best practice to drive what IFRC President Francesco Rocca – in New York for the General Assembly – called “a step-change in the way we plan for and anticipate disasters”.*

The initiative was formally launched Monday by the Prime Minister of Bangladesh, Sheikh Hasina, during a national contribution to the Adapting Now: Making People Safer segment of the Climate Action Summit.

“This is an ambitious new initiative created by the UK, Finland and the IFRC,” she said, “and it aims to make a billion people around the world safer from disasters by 2025, by bringing the humanitarian, development and climate communities together in their action.”

Bangladesh, she added, had shown how a strong early-warning system and a coordinated approach to disaster management can make a big difference.

“So we joined this initiative to share our experience with other vulnerable countries as we’ll all have to learn from others in mitigating the risks of future hazards.

“Let us work together for a safe world for our future generation.”

REAP is part of a new funding package of £175m announced by the UK Department for International Development (DfID) on Sunday, and the UK’s initial support is worth more than US$ 100 million.

But it’s believed that implementation of all REAP’s objectives will require concerted efforts by a range of donors over a period of years; and the partnership will help foster those investments, like the Green Climate Fund, for example, which is also joining it.

“Helping developing countries to protect against the impact of extreme weather will ensure that the world’s poorest are better able to cope with disasters in the future.”

Mr Sharma also announced £90m for the Global Risk Financing Facility, as the other part of the total; jointly funded by Germany and delivered by the World Bank, this will deploy financial services like insurance to help governments and humanitarian agencies access funding faster for more effective response.

Welcoming REAP, IFRC Secretary General Elhadj As Sy told a news conference at the UN in New York today: “We are not powerless in the face of shocks and hazards – we need to prevent shocks from becoming disasters through our work in communities around the world, supported by REAP.”

He said REAP had four main goals: strengthening laws and policies on disaster; financing that reaches people not after disasters but when there is a forecast of disaster; early action connected to early warning; and preparedness for heatwaves.

IFRC President Francesco Rocca said Sunday: “Climate risks don’t need to become disasters if we can act in time, and if we prioritize the most vulnerable people through our decisions, policies and laws.

“Through REAP, we want to make the ‘last mile’ the ‘first mile’.”

Fifteen countries and nearly 20 agencies in total are currently signed up to the partnership; others are expected to join.

A DfID press release Sunday said: “Working with countries across the world and organizations like the UK Met Office and [the IFRC, the REAP] partnership will improve the availability and quality of weather forecasting information.

“Better information and early-warning systems will give people more time to adapt and prepare for extreme-weather events, making them easier to predict.

REAP would also help developing countries “make detailed action-plans for natural disasters, including ensuring survivors are safe and have access to food, water and shelter.”

Jemilah Mahmood, IFRC Under Secretary General for Partnerships, tweeted that the IFRC was “proud to be given the responsibility to host the REAP secretariat. Partnership is key to success.”

‘It aims to make 1 billion people
safer from disasters by 2025, by bringing
the humanitarian, development and climate
communities together in their action’

At the UN yesterday, another British official, Zac Goldsmith, minister of state at DfID and the Department for Environment, Food and Rural Affairs, voiced support for the idea of nature-based solutions.

“We’ll invest in nature-based solutions helping coastal communities insulate themselves against climate change and restore natural capital,” he told an audience at the opening of the Building a Resilient Future Day.

“Over half the world’s coastal wetlands have already been lost and around third of fisheries have collapsed or are on the brink of collapse,” he added.

“This is a human as well as biodiversity issue: 200 million people depend on fish for their livelihoods.”

Sunday’s all-day resilience event was aimed at setting out “ambitious and transformative actions on adaptation and resilience”, organizers said.

Hosted by the New School University, it was convened by the Global Resilience Partnership and sponsored by DfID, with additional support from the Swedish International Development Cooperation Agency.

*The IFRC's own Cost of Doing Nothing report was published last week in the run-up to the Climate Action Summit.