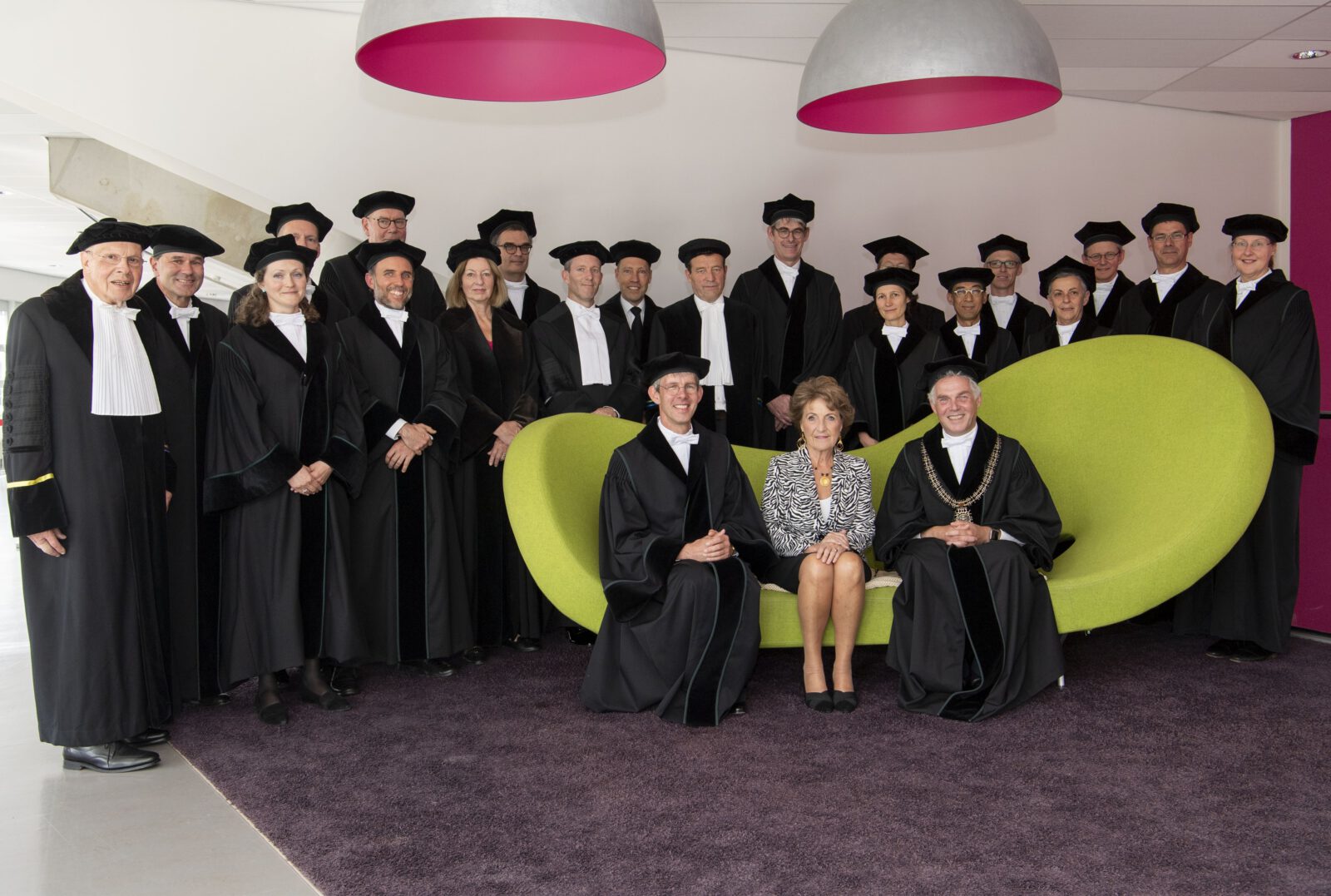 Climate Centre Director Maarten van Aalst – who is now Professor Dr Van Aalst – on Friday gave his inaugural lecture at the University of Twente in the presence of Princess Margriet of the Netherlands, in whose name his research chair was instituted last year to make use of knowledge on natural disasters and climate for better prevention.

Maarten, who took his PhD in atmospheric science, is now Professor of Spatial Resilience for Disaster Risk Reduction at the university’s world-renowned Faculty of Geo-Information Science and Earth Observation (ITC).

Introducing Professor Van Aalst, Princess Margriet thanked the Netherlands Red Cross for its work over the years with her humanitarian fund, saying it had “enabled the Red Cross to carry out projects with a focus on disaster risk reduction and resilience around the globe.

“These projects are preventing disasters and make a real difference for the most vulnerable people. Now they need to be taken to scale.”

Princess Margriet argued that one euro spent on prevention saved seven later, adding that: “We must fully embrace this advantage.”

In his wide-ranging lecture, Professor Van Aalst reviewed the history, experience and philosophy of the Red Cross Red Crescent Climate Centre and its work on the humanitarian impacts of climate as the specialist reference centre of the International Federation of Red Cross and Red Crescent Societies (IFRC).

He began his lecture – entitled Early warning, earlier action. Resilience in the face of rising risks – by arguing that the humanitarian community could continue to “take courage” from what has been achieved in Bangladesh, where death tolls in cyclones are “at least two orders of magnitude lower” because of early warning early action.

He cited the report from the Global Commission on Adaptation, published last week, which found a “7.1 trillion [dollar] return coming back for that 1.8 trillion investment” [in preparedness] – so it’s a massive gain”.

On heatwaves, Professor Van Aalst pointed out that because of better warnings and the experience earlier this century of heavy human losses in Europe, there are now “very clear protocols” about how to care for elderly people and vulnerable hospital patients during heatwaves like this summer’s extreme events.

But he added: “Several European countries still don’t count these numbers [of heatwave deaths]. Many developing countries have no idea” of the number of people who die in heatwaves.

Yet from a hazard perspective, he argued, “creating early warning systems for heat is one of the simplest things you can do. So there’s an immense opportunity for early action as well.”

Governments and humanitarians now found themselves managing complex risks at the same time. In the Netherlands, for example, “where we think of ourselves as a country that needs to protect itself from the water, but actually we also need to think about how we can save it and have it when we need it.”

On the “huge topic” of resilience, Professor Van Aalst said that from his research chair he would “try and provide clarity what are the most important dimensions and what are less important things that we can put aside for the moment, to end up building resilience in a very practical manner.”

This was essentially a threefold process: going from global to local, looking at the question of past, present and future in understanding how things have changed, and considering not just scientific information about time- and spatial scales, but also “the systems in which the information needs to end up”.

The beauty of ITC, he said, and his own chair, was that “it’s in a framework of actually building capacity among those people that need to use that information.”

The faculty had a “a long history of building capacity in developing-country institutions”, with an alumni network of people [in] governments all around the world who were in effect the counterparts of National Societies.”

But Professor Van Aalst said on the question of institutions, instruments and incentives, “a critical question I’ll try to answer is what works – and what works at scale.

“To be blunt, we’ve seen too many pilots, and we need proper monitoring and evaluation of the sorts of interventions that we’ve been doing.”

He concluded by wondering aloud whether the kind of social protection schemes that people relied on in the UK and the Netherlands could be replicated in the developing world.

In Africa, for example, a supermarket might be given some rapid financing to help it prepare for flood danger highlighted by “geospatial information fed into an app being developed by the American Red Cross”; it could then stock up on non-perishable items and “become a community service provider – not relying on the Red Cross but providing food locally during the period of disaster and become a better business.”

Professor Van Aalst’s lecture was delivered immediately after a special symposium – also in the Waaier Building at the University of Twente, in the Dutch city of Enschede – to allow an audience “to hear from global experts, experience changing risks, and contribute to global agendas.”

Opening remarks were delivered by the Rector of the University of Twente, Thom Palstra, and Marieke van Schaik, Secretary General of the Netherlands Red Cross.

Thee were keynote speeches from André Kuipers of the European Space Agency and the first Dutch astronaut to go into space twice, and Stéphane Hallegatte of the World Bank.

Twente’s ITC faculty is regarded as one of the world’s leading institutes in the field of geospatial information and remote sensing; it hosts five research chairs in the area of natural disasters, including risk management and reduction, and reconstruction.

Princess Margriet of the Netherlands, seated centre, with the Rector of the University of Twente, Thom Palstra, at right, and Professor Van Aalst at his lecture ceremony to mark his appointment as Professor of Spatial Resilience for Disaster Risk Reduction at the university’s leading Faculty of Geo-Information Science and Earth Observation. (Photo: Elroy van Sloten)