Helped by the young, Asia Pacific steps up to lead transformation to a ‘1.5°C climate-resilient world’ 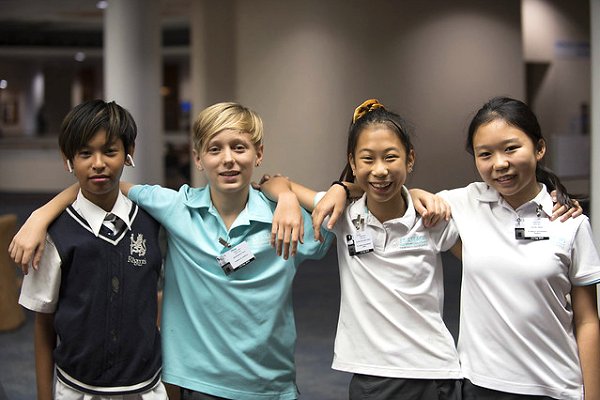 Asia-Pacific Climate Week (APCW 2019) ended in Bangkok Friday with agreement on an overarching key message for the UN summit in New York later this month that Asia Pacific could lead a transformation to a “1.5°C climate-resilient world” through “dynamic sub-national regions and cities, an innovative private sector, political leadership and finance.”

The summit’s other key messages included – under resilience and adaptation – a call for a “fundamental shift in mindset…for transformative change in our systems in order to achieve long-term resilience for all”.

Local communities must be at the centre of adaptation and risk reduction, the meeting argued, adding that “[r]eadily accessible science, data, knowledge and resources are essential” for national planning.

A UN press release Friday said adaptation planning and finance were a key theme throughout the week, “with a focus on communities and ecosystems that need it most”.

The UN said speakers at the opening high-level segment warned of the “dire consequences” of a low level of global ambition to tackle climate change that was putting the world on a path towards warming of more than 3°C.

The Bangkok gathering, which included extensive engagement by regional Partners for Resilience organizations, saw a structured dialogue in which government representatives highlighted the importance of economic incentives such as green jobs as part of planning for Nationally Determined Contributions.

Representatives of indigenous peoples from the Asia-Pacific region, academics and other specialists in Bangkok all stressed the need for “a shift in mindset in the fight against climate change,” the UN said.

The IFRC was represented by Christopher Rassi, Head of the IFRC Country Cluster Support Team in Bangkok, who emphasized at an early panel – Coherence in Adaptation Planning: A Reality Check – that it was time for “a paradigm shift in the way we work with communities at risk”, moving towards acting preventatively to reduce exposure, vulnerability and impact.

For National Societies, Rassi said, fostering community resilience was the answer: “It encapsulates all we aim to achieve.”

Through it, among other things, it would be possible to “dramatically change our conventional model of humanitarian assistance to one that is more risk-centred and anticipatory, and anchored in science.”

The IFRC earlier tweeted that its engagement in Bangkok centred on “forecasting and early action, empowering local communities affected by the climate crisis, and integrated risk management.”

The Climate Centre’s Manila-based Senior Policy Adviser, Donna Lagdameo, told a closing summary panel Friday that the “central message during the week was about working together and removing silos so there is mutual reinforcement at different levels.”

On the core issue of climate finance, “we need to push boundaries and find new ways of supporting vulnerable communities,” she told the panel, which also included Wandee Khunchornyakong Juljaren, chair of Thailand’s SPCG company, a regional leader in the solar-power sector.

“We need to be grounded in the realities of communities – at the end of the day it will be these realities that steer us toward reducing vulnerability and sustaining long-term development,” Lagdameo added.

APCW 2019 is the third regional climate week this year after events in Ghana in March and Brazil last month.

Young visitors at the Asia Pacific Climate Week in Bangkok last Thursday where youth groups played an important role, engaging with participants and covering the discussions on social media, the UN said. Over half the world’s 1.8 billion young people live in Asia Pacific. (Photo: UNFCCC)