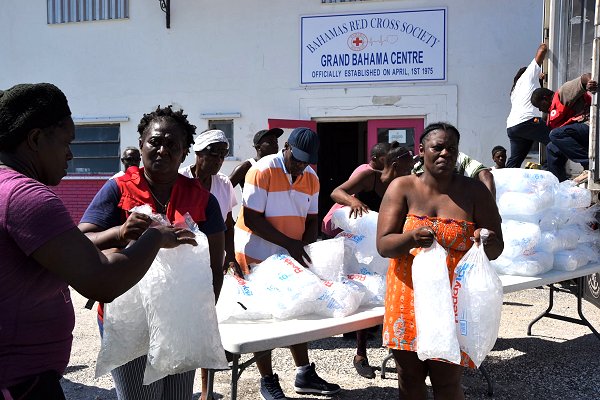 (This story is an IFRC press release issued earlier today from Geneva.)

With access to the battered islands of Abaco and Grand Bahamas slowly beginning to open up, the IFRC has started rolling out a major emergency relief effort. Initial aerial assessments released overnight confirm widespread devastation to the islands.

According to national and regional authorities, it is estimated that approximately 76,000 people – the vast majority of residents on the two islands – have been affected by Hurricane Dorian which made landfall as a Category 5, and then hovered over the island nation for the better part of two days.

The Bahamas Red Cross and IFRC relief effort will focus on addressing the needs of the most vulnerable. Among this group may include some of an estimated 4,400 children under 15, as well as approximately 1,600 older people.

‘Speed is of the essence’

Stephen McAndrew, IFRC’s Deputy Regional Director for the Americas, said: “Now that Dorian is moving away from the Bahamas, there is a window of opportunity to save lives and begin to ease the suffering of these communities.

“We have had a rapid assessment and response team on standby since the beginning of the week – they will move in today to join our previously deployed team members already in Nassau.

“We also have a first flight of relief supplies being loaded at our logistics hub in Panama – it can move as soon as the airports are up and running. Speed is of the essence.”

The IFRC appeal is seeking 3.2 million Swiss francs (US$ 3.2 million). It focuses primarily on providing short- and mid-term shelter assistance to families, as well as replacing lost and necessary household goods such as lamps, cellphone chargers and tarpaulins.

Red Cross volunteers and staff will also distribute hot meals and food rations to people who may have gone without food for days, before shifting their focus to distributing cash grants.

This approach gives people the agency to make their own decisions about what they need and helps inject cash into local economies.

Other interventions include health, psychological support, water, sanitation and hygiene, and activities designed to prevent and respond to violence against vulnerable groups, including sexual and gender-based violence.

The IFRC has already released 500,000 Swiss francs from its Disaster Relief Emergency Fund to ensure an immediate supply of cash for the response teams on the ground.

With Hurricane Dorian now tracking north up the US eastern seaboard, many media outlets have understandably concluded that it is one of a kind, writes Climate Centre Director Professor Maarten van Aalst.

CNN meteorologist Ivan Cabrera said yesterday, for example, that in his 25 years’ experience he’d never seen a storm behave like Dorian, which stalled over the Bahamas and caused what Prime Minister Hubert Minnis said may be “unprecedented damage”.

The Washington Post noted that it’s the strongest storm ever to hit the Bahamas, and other measures like wind speed at sea and on landfall, barometric pressure and rate of intensification place it at or near the top of the modern-era record of intensity.

There are also reports of a major storm-related sea surge in the Bahamas, and as of Wednesday morning, US authorities are warning of unpredictable “surge-related flooding” along most of the south-east coast.

As is very familiar now, storm surges – aggravated by seas levels that are established as being higher because of climate change – are probably the most easily attributable impacts we see.

The IFRC is working on the scenario that everyone on Grand Bahama and Abaco Islands will need some form of emergency assistance. And as with the sheer intensity of Cyclone Idai earlier this year, Dorian neatly fits the expected pattern in a warmer world of stronger and more destructive, but not necessarily more frequent, storms.

To avoid impacts from ballooning even further, we must minimize further warming and also increase ambition to reduce risk and increase preparedness for such events – both critical topics for the discussions now underway at the Asia Pacific Climate Week in Bangkok and in New York later this month.

Bahamas Red Cross volunteers preparing relief supplies for people affected by Hurricane Dorian, which is measuring up to be one of the most intense storms in recent history. (Photo: BRC via IFRC)