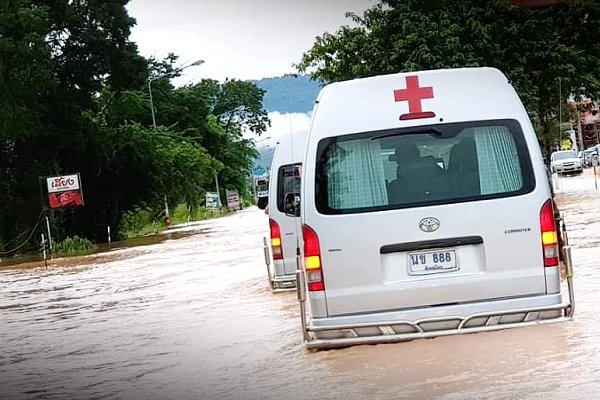 The Asia Pacific Climate Week got underway in Bangkok today, aimed at raising global ambition and intended to “grasp the many opportunities of climate action and to stave off the worst impacts of climate change, which are becoming increasingly costly for the region,” a UN press release said.

Content from the week will contribute to the summit convened by UN Secretary-General António Guterres in New York later this month and COP 25 in Chile in December.

The discussions in Bangkok are focusing on five of the summit’s nine action tracks: energy and industry, infrastructure, cities, resilience and adaptation, and nature-based solutions.

The meeting opened against a backdrop of damaging floods in the north of Thailand after the passage of Tropical Cyclone Podul over the weekend.

The Thai Red Cross has sent nearly 27,000 packages of food and non-food relief to help people affected by the floods, and is using its Safe from Harm app to enable people to report floods and request assistance in particular locations.

During climate week Red Cross Red Crescent engagement will centre on four side-events, beginning today with a workshop on Coherence in Adaptation Planning: A Reality Check, part of the ongoing resilience roadshows.

This will generate recommendations for ways to ensure resources flow across different levels and foster a continuum between national priorities and local vulnerabilities.

On Tuesday Stepping up Actions on Delivering a Resilient Future – organized by the Global Resilience Partnership, the Climate Centre and others – will include five thematic sessions and a presentation on forecast-based financing.

On Friday the latest Regional Technical Experts Meeting on Adaptation has been organized by the UNFCCC, IFRC, Partners for Resilience and BRACED and will centre on finance for adaptation.

The IFRC says its agenda this week in Bangkok would feature “forecasting and early action, empowering local communities affected by the climate crisis, and integrated risk management.”

Tiamkare Thitithamtada, its Bangkok-based Communications and Reporting Officer tweeted that it was committed to supporting climate adaptation in the region and beyond.

“Asia Pacific faces longer rainy seasons, more heatwaves and droughts, and intensified typhoons – all due to the climate crisis. Business as usual is not an option,” she said.

A report late last month by the UN Economic and Social Commission sets out how recent disasters in Asia Pacific, “especially those triggered by climate change, have deviated from their usual tracks and are growing in intensity, frequency and complexity.”

It put the economic loss for the region from such disasters at US$ 675 billion, or 2.4 per cent of total GDP.

The UN says climate actors from around the region are “showcasing ground-breaking climate solutions” at Bangkok through side events, an action hub, exhibition booths (including the IFRC), and a knowledge corner for NGOs, youth organizations and educational institutions.

A high-level segment will be attended by government and UN officials including Ambassador Peter Thomson, UN Special Envoy for the Ocean.

Organized every year in Africa, Latin America and the Caribbean, and Asia-Pacific, the regional climate weeks are “unique collaborative platforms for government and…stakeholders to address the full spectrum of climate issues under one umbrella and [with] unity of purpose,” the UN says.