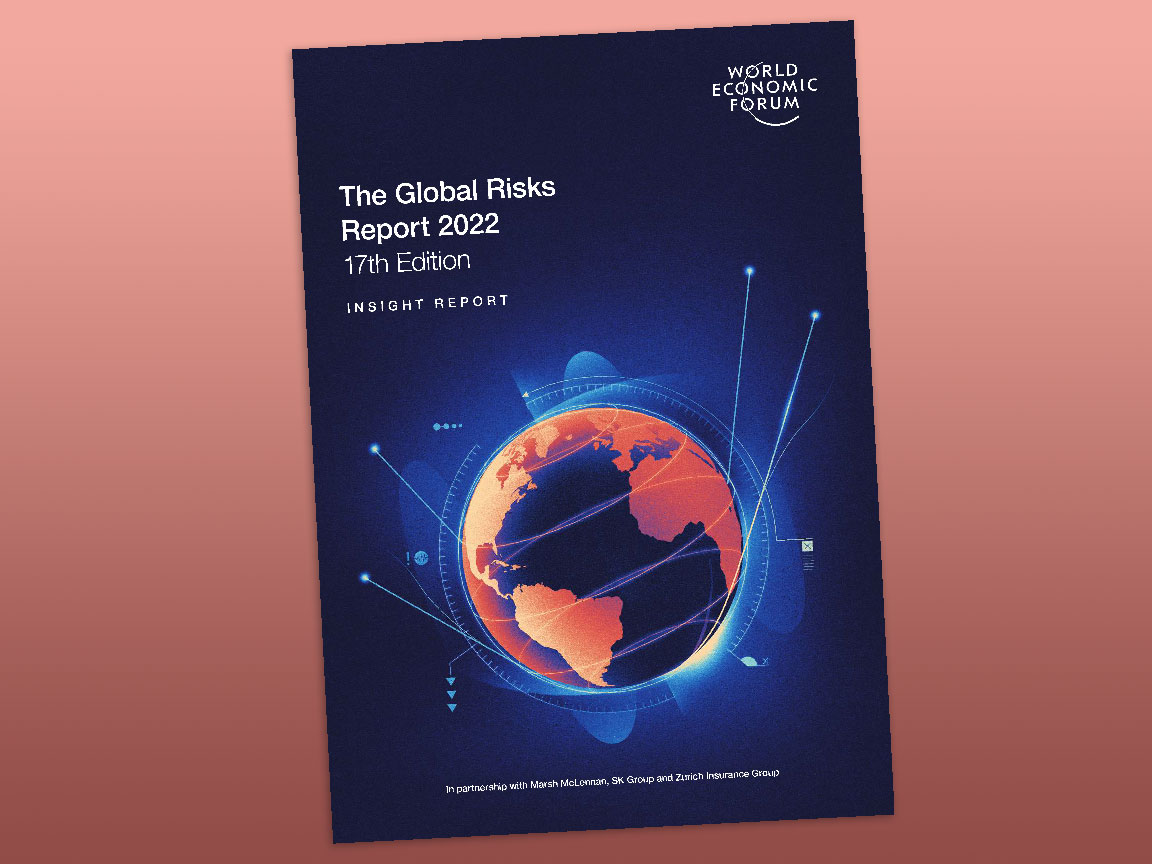 Nearly two years after the first Covid-19 cases countries are reporting record outbreaks of the Omicron variant, “but the pandemic pales compared to the long-term risks the world faces from climate change”.

That’s the view of nearly 1,000 experts and leaders in business, government and civil society speaking for the World Economic Forum’s Global Risks Report 2022, published last Tuesday and summarized by the WEF.

The report says nationally determined contributions unveiled at COP 26 fall short of the Paris goal of 1.5°C of warming. “The current trajectory is expected to steer the world towards a 2.4°C warming, with only the most optimistic of scenarios holding it to 1.8°C.”

Failed action on climate, extreme weather and lost biodiversity now come first, second and third respectively in a list of the top ten global risks over the next decade, in the report’s annual survey of perceptions.

Societal risks, including infectious diseases in sixth place, make up the next third on the list, followed by “human environmental damage” and “natural resource crises”.

“Climate action failure is also considered the most critical threat to the world in both the medium term – up to five years – and over the decade, with the highest potential to severely damage societies, economies and the planet,” the WEF summary says.

“Most respondents to the survey believe too little is being done: 77 per cent said international efforts to mitigate climate change have ‘not started’ or are in ‘early development’,” it adds.

WEF Managing Director Saadia Zahidi said last week: “Widening disparities within and between countries will not only make it more difficult to control Covid-19 and its variants but will also risk stalling, if not reversing, joint action against shared threats that the world cannot afford to overlook.”

The report’s Chapter 2 – Disorderly Climate Transition – points out that while Covid lockdowns saw a fall in emissions of greenhouse gases, “upward trajectories soon resumed: the GHG emission rate rose faster in 2020 than the average over the last decade.”

The chapter highlights the difficult choice between continuing with carbon-intensive development and its costs on one hand, and on the other moving away from industries that still employ millions of workers and risking economic volatility, increased unemployment and “societal and geopolitical tensions”.

It says there are “still many unknown risks from deploying untested biotechnical and geoengineering technologies, while lack of public support for land-use transitions or new pricing schemes will create political complications that further slow action.

“A transition that fails to account for societal implications will exacerbate inequalities within and between countries, heightening geopolitical frictions.”

The Global Risks Report 2022 adds, however, that there encouraging lessons to be drawn for resilience from the Covid pandemic, and it factors in advice for cooperation in space, greater cyber resilience and “a more sequenced climate transition.”

The World Economic Forum’s Global Risks Report 2022 puts climate at the top of a list of ten hazards facing the world, and most seriously what it calls a “disorderly climate transition”. (Image: WEF)