‘Wading through waist-deep flood waters to reach communities in India’ 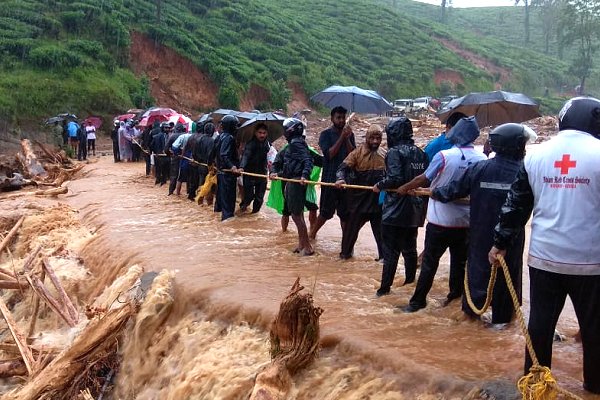 (This article is adapted from a photo story that appeared first on Tuesday on the IFRC news site.)

Extremely heavy rains in mid-July have caused severe flooding in the Indian states of Assam and Bihar.

The floods affected more than 14 million people, displaced over a million and destroyed a vast amount of farmland. Whole houses were submerged and entire villages cut off.

Indian Red Cross Society (IRCS) volunteers have supported communities in both states since the flooding began, warning people about the incoming floods, moving families to safety and providing first aid.

The district of Morigaon in Assam experienced its worst floods in 15 years. “Floods washed over the family home where I had lived for 20 years,” said Muftafizur Rashul, 33, as he surveyed the submerged land.

He’s grateful that his family themselves managed to get away from the rising flood waters in time, but now they face the daunting task of rebuilding their lives.

In Bihar, 80-year old Sita Ram Yadav and his wife Shyama Devi also lost almost everything. “The floods just came in a rush and suddenly we had water up to our waist or higher,” she says with tears in her eyes.

“Flood waters destroyed our rice paddies and washed away the rice, wheat and grains we had stored,” Sita Ram Yadav says. “We also lost five goats and four cows.”

Devastated by their losses, including many personal belongings and even their pots and pans, the family is struggling to rebuild.

To make matters worse, they have encountered snakes including cobras both inside and outside, forcing them to be extra careful as they work to fix what they can.

Still, the couple is trying to stay positive that they will be able to repair their home and regrow their vital crops.

IRCS volunteers have been warning people
about the incoming floods, moving families
to safety and providing first aid

In flood emergencies and other disasters, disease outbreaks are always a threat: in Assam and Bihar, people are now forced to live in unsanitary conditions among flood waters in damaged houses or makeshift shelters, often without proper protection from mosquitoes that transmit rapidly spreading diseases such as dengue.

IRCS volunteers are in the communities raising awareness about health risks and good hygiene practices to help prevent disease outbreaks.

In some districts Red Cross teams also provide free-of-charge medical care and check-ups as well as medicines to families.

In both states, Red Cross branches continue to support families to rebuild their lives. Family packs are being packed and distributed to those worst affected – families such as Rashul’s and Yadav’s who have lost their entire homes and livelihoods. The packs include tarpaulins, blankets, kitchen sets, clothing, bed sheets and buckets.

Dibya Jyoti Deka, 22, is leading the team of volunteers. They are compiling the packs in Assam in the sweltering heat for days on end.

“It’s tough work but I enjoy it,” he says with a smile. “This is the way that I want to serve humanity.”

After what Indian Red Cross Society Secretary General R. K. Jain described as “floods rampaging through several districts of a few states”, the National Society has been battling to reach remote communities, first with warnings about the looming danger, then with relief and first aid. In an intense and unpredictable monsoon, however, some other states have reported deficient monsoon rainfall. (Photo: IRCS-IFRC)