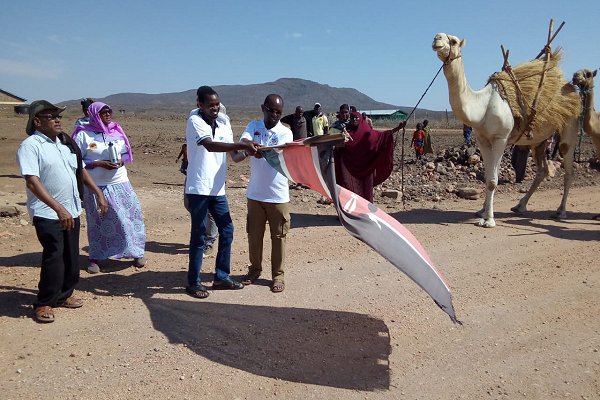 This year’s camel caravan in northern Kenya aimed at raising awareness of the importance of conserving the Ewaso Nyiro river basin concluded at Archer’s Post in Samburu county on Friday.

Some 200 people in two groups spent last week trekking on foot and camelback in Laikipia, Samburu and Isiolo countries through which the Ewaso Nyiro flows.

Water levels in the river – the only one serving the arid north of the country – are said to be declining.

“There are many human activities along the river by different communities from the counties that depend on [it].

“We are engaging them in forums through the journey to encourage them to conserve the river.”

The Ewaso Nyiro serves six counties with 3.6 million people depending on it for all their needs, including livestock, and it’s fed by nearly 40 streams flowing down from Mount Kenya and the Aberdare Range.

“We are seeking to encourage dialogue between pastoralists and farmers for equitable sharing of the water,” Tingoi added.

Other organizations involved in the caravan include Kenya’s Water Resources Authority and the local governments of the three counties.

This theme for 2019 was given as “Saving the Ewaso Nyiro ecosystem through sustainable management of natural resources, enhanced livelihoods and peaceful coexistence”.

Part of the 2019 camel caravan is waved off at Biliqo, Isiolo county last week. (Photo: @Kabelojunior5 via Twitter)