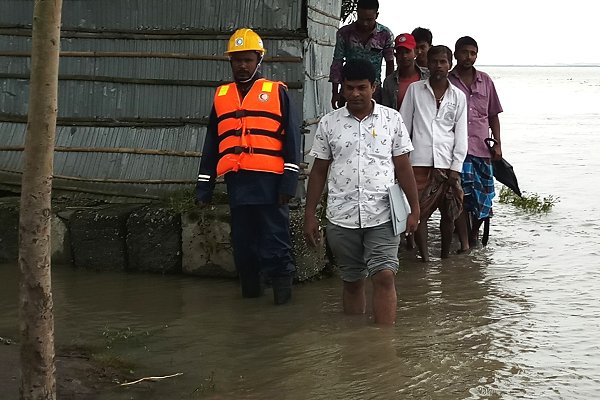 (This story is an IFRC press release issued yesterday in Dhaka, Kuala Lumpur and Geneva.)

Continued heavy rainfall in Bangladesh combined with severe flooding in neighbouring countries have led to the highest river-water levels in a century, putting an estimated 7.6 million people at risk of hunger and disease.

Floods have left hundreds of thousands stranded in northern and north-eastern parts of the country and damaged more than 600,000 homes.

Communities are also reporting food shortages as more than 160,000 hectares of farmland have been damaged.

Azmat Ulla, Head of the IFRC Bangladesh Office, said: “When I was in Bogura district this week, families who lost their homes and are now camping on road embankments told me they desperately need food, water and healthcare.

“Others said they have two crops a year. With the loss of one, they worry about feeding their families in the coming months. More floods are expected, so the situation is dire.”

The IFRC has launched an emergency appeal for nearly US$7m to support the Bangladesh Red Crescent Society (BDRCS) in reaching 150,000 people affected by the floods in the worst-hit districts with food, clean water, hygiene items, tarpaulins and tools, and health-care services. Families will also be supported in rebuilding their livelihoods.

Md. Feroz Salah Uddin, BDRCS Secretary General, said: “More than 775 of our volunteers and staff are already in the flood-affected communities providing critical relief supplies to thousands of people but we urgently need to reach many more.

“Every day we hear of more families being at risk – sleeping out in the open or in makeshift shelters, not having enough food and drinking water, and contracting diseases such as pneumonia and skin infections.”

Red Crescent volunteers checking on a community in Lalmonirhat district, in the north of Bangladesh, where they have also been assisting with evacuations and distribution of food aid. (Photo: BDRCS Lalmonirhat)