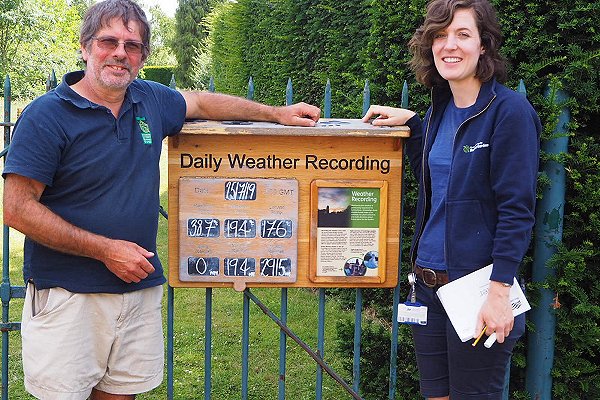 “These figures are further indications of a changing climate,” a press release from the Met Office said.

For the new annual State of the UK Climate report, the Met Office temperature series for the UK has been extended by 26 years back to 1884 – part of a project to digitize weather-records.

This exercise added several years that are now within the ten coldest, but no new warm years.

The report also includes the key findings that summers and winters have respectively been 13 per cent and 12 per cent wetter than the period 1961–90, six of the ten wettest years have occurred since 1998, and the average sea-level around the UK last year was equal highest with 2015.

The Met Office, meanwhile, Monday confirmed a provisional figure of 38.7°C from its station at the Cambridge Botanic Garden last Thursday (photo) – the highest ever recorded in the UK, which now joins four European countries in setting new records in last week’s heatwave; it exceeds the previous UK record of 38.5°C set in August 2003.

“Heatwaves are extreme-weather events, but research shows that with climate change they are likely to become more intense,” an earlier Met Office release said.

“The UK climate has been warming since the mid 20th century, and this has been accompanied by similar increase in the hottest day of the year, which for the most recent decade has been 0.8°C higher [than]1961–90.”

The Met Office says climate change has increased the likelihood and severity of heatwaves across Europe, as well as the risk of an extraordinary 40.0°C event in the UK.

Staff at the Cambridge Botanic Garden last week with their reading of what is now confirmed to be the highest temperature ever recorded in the UK of 38.7°C. (Photo: CBG via social media)