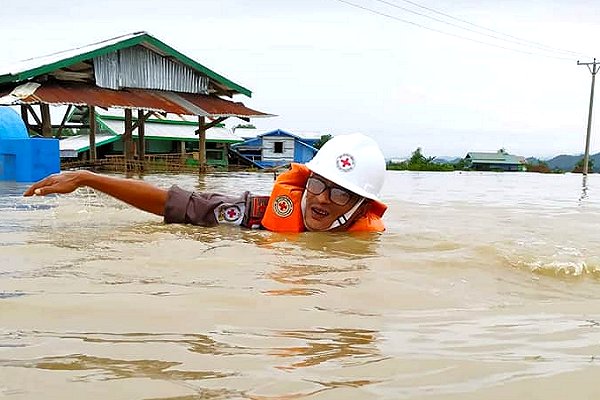 Red Cross and Red Crescent volunteers across Bangladesh, India, and Nepal are racing to deliver emergency supplies to communities and prepare them as the situation in many areas is likely to worsen in the coming days.

The numbers of people affected is likely to rise and there are growing concerns about potential food shortages and disease outbreaks.

Xavier Castellanos, IFRC Regional Director for Asia Pacific, said: “We are seeing growing numbers of displaced and increasing loss of life with each day of rain.

“Entire communities have been cut off by rising waters, increasing the risk of people going hungry and getting sick.

“All of our efforts right now are focused on reaching these people and ensuring that they have the supplies and support needed to withstand coming floods.”

Heavy monsoon rains and flooding cause massive displacement and death every year across South Asia.

In Assam state, India, over a million people have been displaced after the Brahmaputra River, which flows from the Himalayas into India, burst its banks swamping more than 749 villages.

In south-eastern Nepal, the worst-hit districts are submerged under water and inaccessible to Red Cross response teams.

Meanwhile in Bangladesh, one third of the country is under water displacing 14,000 people and destroying over 11,000 homes.

Over the past week, heavy rains have caused more than 200 landslides in Cox’s Bazar which hosts some 900,000 people living in makeshift camps.

More than 1,000 volunteers from the Bangladesh Red Crescent, Nepal Red Cross and Indian Red Cross have been working alongside local authorities in conduct search and rescue efforts and to provide first aid and relief.

IFRC teams in the three countries are working alongside their local Red Cross and Red Crescent counterparts to deliver relief and recovery efforts and to coordinate international assistance if and when it is needed.

As well as South Asia, China, Japan and Myanmar (photo) have all experienced severe monsoon-related flood losses in recent days and weeks. In the photo a Myanmar Red Cross volunteer struggles through floodwater to help stranded people to safety. (Photo: Myanmar Red Cross via IFRC)