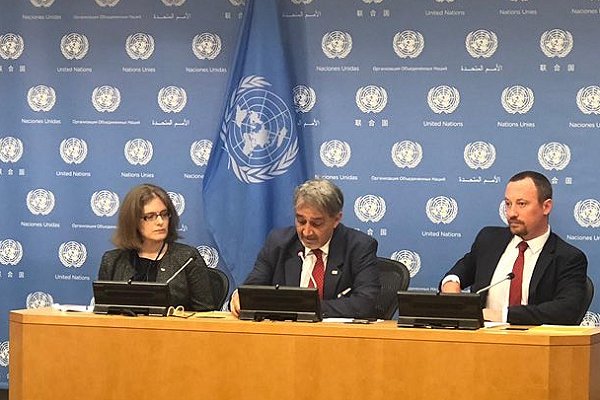 (This story is an IFRC press release issued earlier today in New York and Geneva.)

A new resource launched today in New York will help cities prepare for heatwaves – extreme weather events that are among the world’s deadliest types of natural hazard.

Speaking at UN headquarters in New York, the IFRC President Francesco Rocca, said: “Heatwaves are one of the deadliest natural hazards facing humanity, and the threat they pose will only become more serious and more widespread as the climate crisis continues.

“However, the good news is that heatwaves are also predictable and preventable. The actions that authorities can take to save lives and significantly reduce suffering are simple and affordable.”

The new Heatwave Guide for Cities from the Red Cross Red Crescent Climate Centre offers urban planners and city officials an authoritative summary of the actions they can take to reduce the danger of heatwaves, which are defined as a period of time when temperatures, or temperature in combination with other factors, are unusually high and hazardous to human health and well-being.

Seventeen of the 18 warmest years in the global temperature record have occurred since 2001.

Several serious heatwaves have killed tens of thousands of people worldwide during this period, including the 2015 heatwave in India that killed around 2,500 people, and the 2003 heatwave across Europe that lead to more than 70,000 deaths.

The people at greatest risk of heatwaves tend to be those with pre-existing vulnerabilities, including elderly people, very young children, pregnant women, those with medical conditions, and people who are socially isolated.

“Heatwaves are silent killers because they take the lives of people who are already vulnerable,” said Rocca. “It’s vital that everyone knows how to prepare for them and limit their impact.”

‘Heatwaves are predictable. The actions authorities
can take to save lives are simple and affordable’

Around 5 billion people – much of the world’s entire population – live in regions where extreme heat can be predicted days or weeks in advance.

Examples of the actions that cities can take include:

*Establishing systems to warn people ahead of anticipated periods of extreme heat;
*Strengthening health-systems to reduce the risk of them being overwhelmed during a heat crisis;
*Conducting community-awareness campaigns;
*Establishing cooling centres and telephone helplines for vulnerable people in need of help, treatment and support;
*Greening cities and urban centres, for example, by planting trees, protecting green spaces, and introducing car-free zones.

The influence of climate change on heat extremes was evident again in Europe in June when cities across the west of the continent recorded record temperatures – an event that scientists believe was made at least five times more likely by climate change.

(Note to editors: The Heatwave Guide for Cities has been produced by the Climate Centre in collaboration with more than 25 partner institutions including ICLEI, Arizona State University, Met Office, John Hopkins University, USAID, International Research Institute for Climate and Society, the World Meteorological Organization and World Health Organization Joint Office for Climate and Health, Thomson Reuters Foundation and the cities of Cape Town, Kampala, Entebbe, Ekurhuleni and Phoenix.)

A new guide to help cities cope with the heatwaves to which they are especially vulnerable was launched today by IFRC President Francesco Rocca (photo, centre) at UN headquarters in New York. He told reporters heatwaves are one of the deadliest natural hazards facing humanity, and the threat they pose will only become more serious with global warming. With him is his adviser Tommaso Della Longa, and the Climate Centre’s Julie Arrighi, its Urban Manager and ICRC Partnership Lead. (Photo: IFRC)