Ireland: ‘Put the most vulnerable at the centre of our work’ 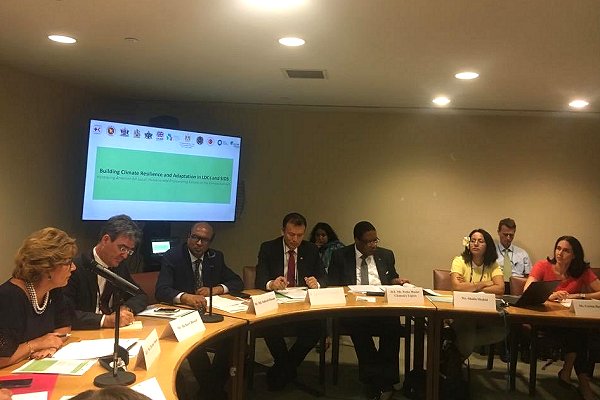 A panel at the UN in New York heard a strong call Friday from Ireland’s permanent representative for the most vulnerable people to be placed “at the centre of our work”.

Irish UN Ambassador Geraldine Byrne Nason (photo, far left) was speaking at a side-event, chaired by the IFRC and including the Climate Centre, at the end of the first week of the 2019 high-level political forum on sustainable development, convened under the auspices of the Economic and Social Council.

“We must also ensure that funding goes where it’s need most,” she added in remarks tweeted by the Irish mission.

The New York panel was entitled Building Climate Resilience and Adaptation in Least Developed Countries and Small Island Developing States, and centred on how they are “successfully taking action and building resilience to the impacts of climate change, including in improving access to finance mechanisms and building capacity at the local level.”

It stressed the need for investment for the most vulnerable to be scaled up, and set out “links between global, national and local processes and actions…to build the resilience of people living in least developed countries,” according to the programme.

Ambassador Byrne Nason told the panel Ireland had “long recognized that the 2030 Agenda [on the global goals] will not be achieved without investing in resilience to climate change.

“This is why we have put resilience and those people furthest behind at the centre of our development policy.”

The panel was chaired by the IFRC’s Head of Delegation and Permanent Observer at the UN in New York, Richard Blewitt, who tweeted that reaching and empowering communities was now “top priority in this climate crisis”.

It is seen as part of the build-up to the 2019 Climate Summit in New York in September, and also included and several other permanent representatives and senior officials.

The Climate Centre was represented by Carina Bachofen, its Manager, Policy and Partnerships (at far right in photo), who invited other countries to detail their own contexts on early warning early action in the interests of the most vunerable.

‘#HLPF2019’ continues this week with a three-day ministerial meeting; on Wednesday the IFRC, Climate Centre and other partners will facilitate a second side-event panel on reducing the impact of heatwaves, following the release at a press conference in New York tomorrow of new Red Cross Red Crescent guidelines on how cities can better prepare for them.

A panel at the 2019 high-level political forum on sustainable development at the UN in New York heard a call from Irish UN Ambassador Geraldine Byrne Nason (at far left) for the most vulnerable people to be placed “at the centre of our work”. (Photo: social media)