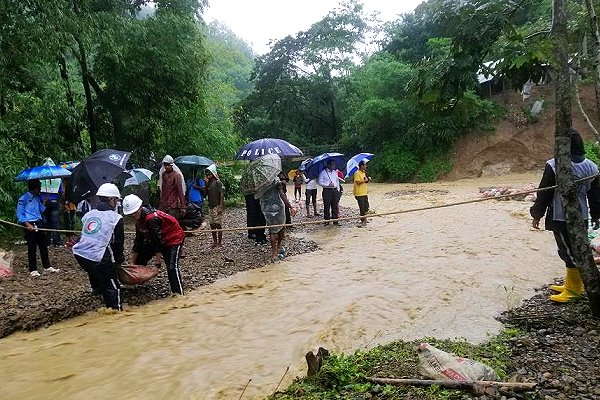 Bangladesh Red Crescent Society (BDRCS) response operations were underway in seven camps where at least 1,800 shelters have been damaged or destroyed and some 8,500 people affected.

“The [monsoon] rains have only just begun, yet access to some of the camps is nearly impossible,” said Sanjeev Kafley, IFRC Head of Sub-Office in Cox’s Bazar, quoted in a press release issued Thursday.

The BDRCS yesterday reported “a massive flooding situation in low-lying areas of northern, north-eastern and south-eastern districts”, adding that the forecast was for at least five days more flooding in these districts.

Cash-based forecast-based financing interventions by the BDRCS were also getting underway this week in several unions of northern districts, supported by the German and Swiss Red Cross and the World Food Programme.

Other Partner National Societies standing by to assist were the American, British, Danish and Swedish Red Cross and the Turkish Red Crescent, the BDRCS said.

The ICRC delegation in Bangladesh said torrential rains “continue to disrupt normal life in the camps” and it was responding as required in its operational areas.

Bangladesh was one of seven Asian countries that had experienced “higher than average” seasonal rainfall over a six-day period that ended last Tuesday, according to the scientific division of the UK Met Office.

It tweeted that the monsoon had produced “severe flooding in parts of China and Japan. Western India saw flooding induced by enhanced moist south-westerly flow, and Tropical Storm Mun moved into Vietnam [in early July].”

But Syed Ali Nasim Khaliluzzaman, Red Crescent Head of Operations in Cox’s Bazar, said: “With the amount of rain forecast, we are seriously concerned that we will not be able to access the affected people to provide them with essential relief items.”

The Nepalese Red Cross said over the weekend it had activated its emergency operations centre as “heavy rain created havoc” in parts of the country.

The National Society was providing assistance to families in one village, Dharmasthali, in Kathmandu district, and sandbags to police units attempting to shore up riverbanks.

It reported 21 people missing and more than 3,000 families displaced in a summary yesterday of the impact of monsoon-related floods and landslides; Reuters quoted the Nepalese Home Ministry as saying 55 people had died.

Local media reports tweeted by the National Society, however, said that in one district, Kailali, where floods had killed 27 people 12 years ago, an advance warning system introduced in 2008 was now saving lives.

“When people get prior notice of the impending disaster, they can act on time to save their lives,” NRCS Kailali President Uttam Joshi told the Himalayan Times.

An early-information system “has prevented major tragedy in the district ever since [it] was brought into operation.”

There are nearly 40 points where river flow was read by gauges and warning information transmitted to community-based disaster committees downstream, the newspaper explained.

The Chinese Red Cross, meanwhile, says it has recently been assisting many thousands of people affected by monsoon rains in the southern provinces of Hunan, Jianxi and Fujian.

It added in a separate item that the Ministry of Water Resources was reporting a record number of rivers registering floods since the start of the season: 377 countrywide, an 80 per cent increase in two decades.

At the peak of the monsoon rain in south-west Japan earlier this month, evacuation orders for more than a million people were issued in Kagoshima and Miyazaki prefectures.

The Japan Times reported that the southern city of Soo had seen 410mm of rain in a single day on 3 July, “the highest since data was first recorded in 1977.”

Bangladesh Red Crescent volunteers in action in Rangamati district. More heavy rain and floods are forecast for at least the next five days. (Photo: BDRCS via IFRC)