‘One climate-crisis disaster is happening every week’ 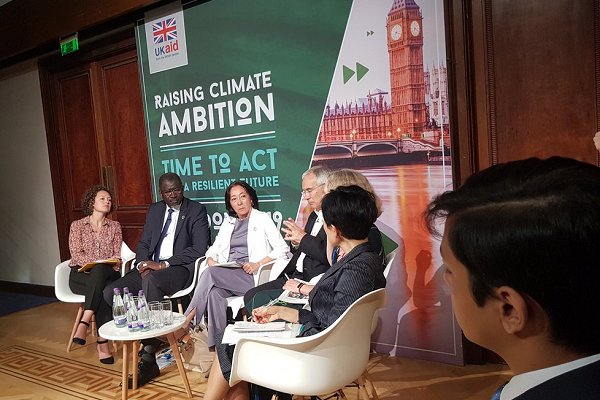 Mami Mizutori, the UN secretary-general’s special representative on disaster risk reduction (photo, centre), has said that relatively small-scale climate-related disasters are happening “at the rate of one a week”, though most draw little international attention.

She told the UK Guardian newspaper in an interview last week, London Climate Action Week, that “lower-impact events” causing death and displacement are occurring much faster than predicted.

But it was major catastrophes such as Cyclones Idai and Kenneth in Mozambique and the drought affecting India that made headlines.

“This is not about the future,” she told the newspaper, “this is about today.”

Adapting to climate change needed investment now, she said, adding that: “People need to talk more about adaptation and resilience.”

Referring to estimates that put the cost of building infrastructure resistant to climate impacts at US$2.7 trillion over the next 20 years, Mizutori said: “This is not a lot of money [in the context of infrastructure spending] but investors have not been doing enough.

“Resilience needs to become a commodity that people will pay for.”

The head of the UN Office for Disaster Risk Reduction said the time for arguments about mitigation versus adaptation was over.

“We talk about a climate emergency and a climate crisis, but if we cannot confront this [issue of adaptation] we will not survive,” she told the Guardian. “We need to look at the risks of not investing in resilience.”

Many lower-impact disasters would be preventable if people had early warnings of severe weather, infrastructure like flood defences, or access to water amid drought, and governments were more aware of which areas were most vulnerable.

Nor is this a problem confined to the developing world, Mizutori said, as recent forest fires in the US and Europe’s first heatwave of the summer had shown.

“We need to take a more holistic view of the risks,” she said, in terms of which government departments do what on climate.

Also at London Climate Action Week, IFRC Secretary General Elhadj As Sy thanked the UK Department for International Development for “charting the way towards the UN climate summit in September,” adding that “political leadership, partnerships and local action are key in preventing climate shocks and hazards from becoming disasters, and supporting vulnerable communities to adapt.”