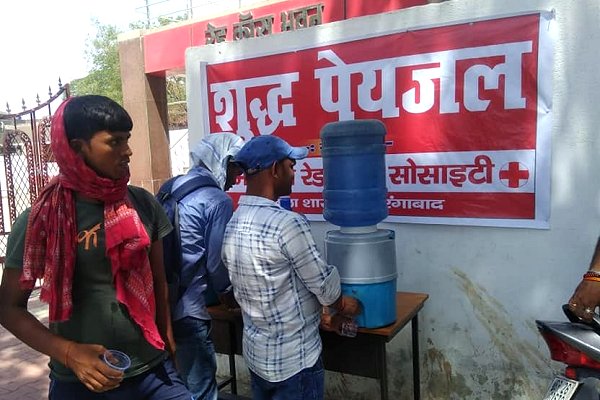 (A longer version of this article, by scientists of the World Weather Attribution collaboration that includes the Red Cross Red Crescent, appeared as a guest post earlier this month on the Carbon Brief website.)

India is currently suffering one of the longest heatwaves in its recent history. Northern and central parts of the country have seen intense heat for more than 30 consecutive days, with temperatures in New Delhi topping 48°C  – the highest ever recorded in the capital in June.

Such an extended period of ferocious heat has been deadly. In the eastern state of Bihar, for example, 180 people are reported to have died, with hospitals “inundated with people suffering from heatstroke”.

The extreme weather follows in the footsteps of a lethal heatwave in 2016, when India recorded its highest-ever temperature of 51°C  in the western state of Rajasthan – one of the hottest temperatures ever recorded on Earth.

Globally, the frequency and intensity of heatwaves are generally rising due to climate change, but we do not yet see a clear upward trend in extreme temperatures in India. Why?

A complex mix of competing human impacts means that, despite rising average temperatures, maximum temperatures have not risen in tandem.

In addition, increasing irrigation means that more of the heat is used to evaporate water and less to warm the air.

Finally, while in many big cities the ‘urban heat island’ effect leads to hotter heatwaves, some cities in the dry north of India actually show an ‘urban cool island’ effect driven by higher water-usage compared to the surrounding arid land areas.

Taken together, these factors play as large a role as global warming and counteract the expected upward trend in heatwaves – at least for now.

To investigate how all these factors affect heatwaves we need reliable observations, difficult to obtain for India.

Analysing both observations corrected for missing data and re-analyses, we find no trend in the highest maximum temperatures of the year over most of India since the 1970s, however heatwaves are defined.

Our study suggests that the combination of increased air pollution and irrigation have more or less offset the warming from increased greenhouse gases.

But the health impacts of heatwaves have been getting more severe due to higher humidity and more air pollution.

For the future, we expect a clear signal of human-caused climate change to emerge in maximum temperatures as measures are put in place in India to improve air quality.

A similar effect was seen in western Europe where summers only became hotter from the mid-1980s onwards when pollution was regulated and reduced.

In addition, with expanding groundwater depletion, keeping up the present-day irrigation rates could prove challenging for parts of India.

Given that greenhouse gas concentrations continue to increase, we expect to see an amplified upward trend in heatwaves in the not-too-distant future, and in the longer run the design of housing and green spaces in cities will need to take more account of rising heat risks.

In France, also now facing a potentially record-breaking heatwave, the Plan Canicule initiated after the 2003 event that killed thousands of people has significantly reduced excess deaths in similar heatwaves.

In India, Ahmedabad’s Heat Action Plan was shown to have drastically reduced mortality during the 2015 heatwave.

Yet many cities do not yet have such plans, and many countries don’t even have early warning for heatwaves.

In the long-term, the projected increases in heat and humidity will require much greater efforts to manage the rising risk of heatwaves.

If global warming continues unabated, it could challenge the ability for humans, livestock and wildlife to survive outdoors in parts of India.

As Indians continued to suffer in another dangerous heatwave, Red Cross volunteers set up stations for the distribution of drinking water to help people stay hydrated. A new scientific study says the true severity of the event may have been masked, and worse heat impacts could be on the way. (Photo: IRCS)