‘We need to talk about conflict and climate change’ 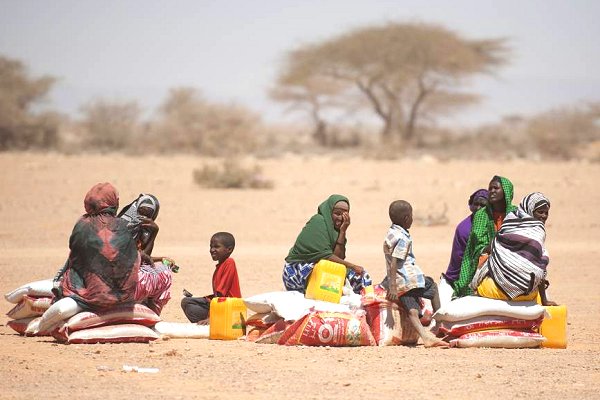 (This article appeared first in The Canberra Times last week. Leonard Blazeby is ICRC Head of Mission in Australia.)

Just as many Australians do, the people of Africa’s Sahel region know what it’s like to live through drought. Located below the Sahara desert, the Sahel’s rainfall is erratic.

About 50 million people depend on water from its largest lake, which is rapidly vanishing. The wet seasons are no longer reliable. People dependent on livestock compete for farmable land, most of which is degraded. Age-old tensions between farming and herding communities are being fuelled.

Drought is always hard. While peaceful and well-resourced countries like Australia might be able to struggle through, that same level of drought can be more devastating for poorer and conflict-affected nations like those in the Sahel.

From its humanitarian work around the world, the International Committee of the Red Cross (ICRC) witnesses how these symptoms of climate change add a complicating layer to conflict. Climate change multiplies the vulnerability of those impacted by violence. We need to talk about what’s at stake.

We feel the impact of climate change in increasingly abnormal seasons, weather extremes, more frequent and severe disasters, a reduction in available freshwater as well as decreased crop yields.

The only way to avert the most dangerous consequences of climate change is to take major steps to reduce greenhouse gas emissions. Even then, that will only limit and not halt climate change.

But climate change does not occur in a vacuum. It tests communities and society at large. Tension over resources, social exclusion, migration, histories of conflict and grievance as well as economic and environmental risks are all factors that may be made worse by climate change.

Children, the elderly and those living in poverty will feel the effects of food insecurity, higher prices, income loss, health impacts and displacement more than others.

‘We need to begin a conversation about
the interplay of conflict and climate change,
then we need to act towards building resilience’

Every day, the ICRC witnesses the impact of climate change on the people affected by conflict who we work with. These communities are particularly vulnerable to the effects of climate change, because conflict limits their capacity to adapt.

Conflict constrains a community’s capacity for collective action. It causes damage to assets like roads, markets and universities that communities will need to formulate a collective response. These are the reasons we need to fold conflict into the climate change equation.

To be clear, there is not enough evidence to say that climate change causes conflict. However, research has found that a decrease or increase in rainfall in resource-dependent economies enhances the risk of localised violence.

The area around Lake Chad in Africa’s Sahel is an example of where this interplay of conflict and climate change can break down the bonds we share – stirring tensions between pastoral and agricultural groups.

A vulnerability to climate shocks is also demonstrated by the impact of floods and droughts in areas of conflict like Yemen, South Sudan, northern Nigeria and Somalia.

As is too often the case, our experience tells us that low-income countries will be the worst affected, as they have the least means to protect themselves.

So what can we do? For a start, we need to know more. We need to begin a conversation about the interplay of conflict and climate change, and then we need to act towards building resilience.

Médecins Sans Frontières together with the Lancet Countdown published a report at the end of 2018 finding that anticipated humanitarian needs due to climate change will far exceed the capacity of relief agencies to meet them. This underscores the need for collective action now.

The effects of climate change will be felt differently in New South Wales than they will in Nigeria, which means that efforts to reinforce community capacity need to be anchored in local realities.

While the Netherlands might be able to afford adding to their existing sea-walls to counter storm surges, other countries with extensive coastlines and fewer resources like Bangladesh don’t have the same luxury. We will experience this same issue differently.

For its part, the ICRC is committed to moving this conversation forward. Our teams in places like Myanmar already factor climate change into their analysis as they help improve shelters for displaced communities.

ICRC president Peter Maurer returned earlier this year from the Sahel, reporting the impacts of conflict and climate change he witnessed to the World Economic Forum.

There is a significant overlap between the people we help who are caught in conflict, and those who are most vulnerable to climate change. We need to focus on sustainable impacts and local solutions. We need more research and to bring more voices to the table.

By contributing both stories and data to this conversation, we can all play a role in amplifying not just the stakes but also a path towards solutions. Whether you endure drought in Australia or in the Sahel, when it comes to conflict and climate change what matters is what we do next.

Families in the Sool region of Somalia wait for transport to take the food distributed by the ICRC. (Photo: Pedram Yazdi/ICRC)