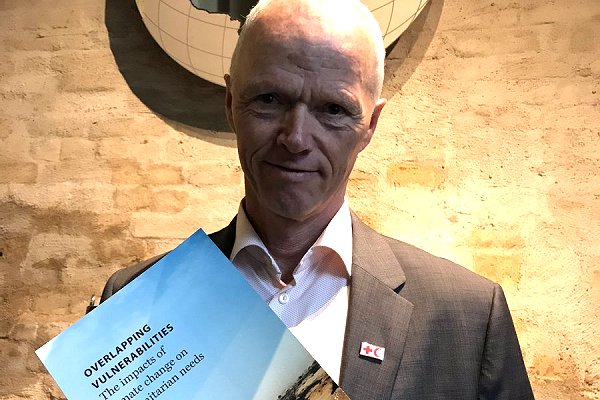 The Secretary General of the Norwegian Red Cross, Bernt Apeland, says the evidence of the humanitarian impacts of climate change is “as overwhelming as it is daunting”.

Writing in a foreword to a new report from the National Society, Mr Apeland says climate impacts are “hitting harder, more often and intensely”.

He adds: “Climate change has severe negative impact on crops, water quality and livelihoods and it can aggravate existing larger-scale conflicts. Climate change will harm those who are already subject to poverty, conflict, and violence the most.”

The results in the report, Overlapping vulnerabilities: the impacts of climate change on humanitarian needs, “leave no doubt about the scale of commitment that is now required: states and civil society must increase their efforts in disaster risk reduction.

“Also, donors must ensure increased and predictable funding and recognise the need to provide both humanitarian and development assistance to people who struggle to survive in protracted conflicts.”

The Norwegian report, which includes several detailed case studies centred on the relationship between climate and conflict, provides an overview of the climate-related challenges ahead for the next decade.

It was released yesterday to coincide with World Environment Day and is the first of its kind from the National Society.

Through case studies on (alphabetically) Afghanistan, Colombia, Somalia and Syria, the Norwegian report explores what it calls the “hotly debated” relationship between climate and conflict.

It says climate change can aggravate existing larger-scale conflicts and play an indirect role through factors like inequality and food security.

“Climate change is not, however, an important cause of the outbreak of armed conflicts as experienced to date,” it concludes.

Norwegian Red Cross President Robert Mood with the National Society’s new report on the humanitarian impacts of climate change launched yesterday. Its findings ‘leave no doubt’ about scale of the global commitment required to roll them back. (Photo: NRC)