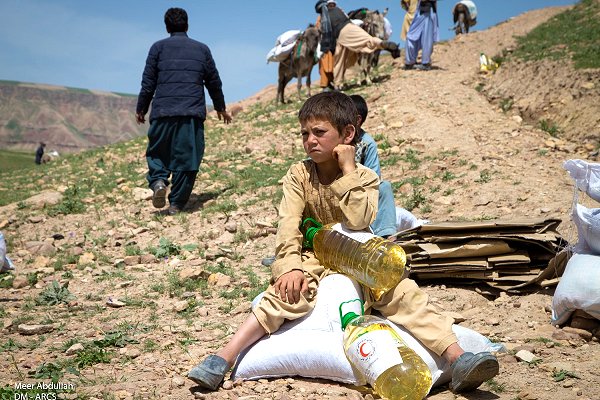 (This story appeared first on the IFRC news site yesterday.)

Afghan Red Crescent volunteers and staff are still hard at work distributing food parcels, blankets, tarpaulins and other support to affected communities devastated by dramatic flooding across the country in March and April.

The most recent distribution was in Hilmand province where around 1,000 food parcels were brought to communities in need.

Even before the floods, drought had left 6.3 million people in Afghanistan in desperate need of humanitarian aid and protection.

Countless people are facing an uncertain and precarious future after three years of drought caused land degradation and desertification, lower agricultural production, economic hardship, hunger and loss of life. Some 287,000 people have been forced to leave their homes.

To respond to continuing floods – and ever-growing humanitarian needs – the IFRC scaled up its emergency appeal seeking 8 million Swiss francs to support the Afghan Red Crescent Society in providing humanitarian assistance to 675,000 people affected by flood and drought for 12 months.

Afghan Red Crescent photographer Meer Abdullah has travelled widely in the country with Red Crescent teams as they distributed much-needed relief. His photo essay was posted by the IFRC late last month. “I had the opportunity to speak with communities and tell them they are not forgotten. That there are people who can assist them,” says Abdullah. (Photo: Meer Abdullah/ARCS)