UN: ‘If we continue engaging with each other and the planet as we do, then our very survival is in doubt’ 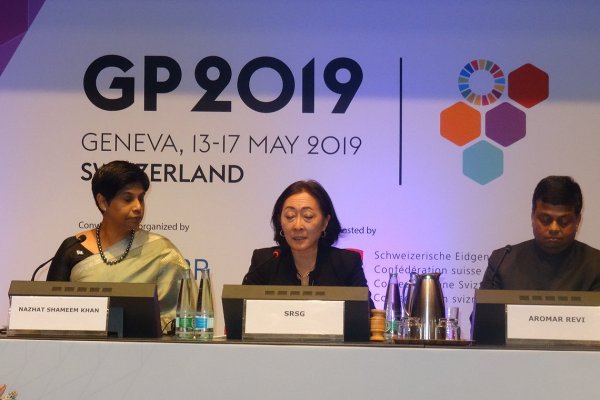 (This story appeared first on the Thomson Reuters Foundation news site yesterday and has been edited here for length. The Global Assessment Report 2019 was also launched at the global platform in Geneva yesterday.)

Increasingly complex, growing and related risks, from global warming to pollution and epidemics, threaten human survival if left to escalate, the United Nations warned on Wednesday.

A biennial assessment report on how the world is dealing with disasters said the past could no longer be relied on as a guide to the future, with new risks emerging “in a way that we have not anticipated”.

It identified a range of major threats to human life and property, including air pollution, diseases, earthquakes, drought and climate change.

There is also growing potential for one type of disaster to produce or exacerbate another, as when heavy rains trigger mudslides after wildfires, warned the report launched at the Global Platform for Disaster Risk Reduction in Geneva.

“If we continue living in this way, engaging with each other and the planet in the way we do, then our very survival is in doubt,” said Mami Mizutori, Special Representative of the UN Secretary-General for Disaster Risk Reduction.

‘Crisis need not defeat us –
it is an opportunity to transform’

The gap between how well rich and poor cope with wild weather and other threats is widening due to poorly planned urbanization, environmental degradation and population growth.

That “complex cocktail of risk” is destroying homes and displacing people, or pushing them to migrate in search of a better life, Mizutori said.

Mizutori told the disaster conference Wednesday that science carried out on climate change and the decline of ecosystems made it clear the world needed to change rapidly to stay safe.

“But crisis need not defeat us – it is an opportunity to transform,” she added.

Maarten van Aalst, Director of the Red Cross Red Crescent Climate Centre, said it was possible to plan for complex situations, such as a heatwave leading to power cuts for people who need to use air conditioning to avoid falling sick.

“We are seeing more surprises, but not all surprises need to be surprises,” he told the Thomson Reuters Foundation.

Kamal Kishore of India’s National Disaster Management Authority said the evacuation of 1.2 million people in the path of Cyclone Fani this month showed a global target to substantially lower deaths in disasters by 2030 could be met.

India had drastically cut mortality from powerful storms in the past two decades, he told journalists, but the coastal state of Odisha still suffered crippling damage from Fani to its power grid, roads, telecommunications and aviation services, he noted. “Is that a sustainable situation?” he asked.

He said more robust infrastructure was needed and building more resilient systems would be the next step for his country.

The Global Assessment Report 2019 showed governments have started to produce data and advance towards the seven global targets set in the 2015 Sendai Framework, which aims to alleviate disaster risk and impacts.

Those targets focus on reducing mortality, numbers of people affected and economic losses from disasters by 2030, but progress, while encouraging, is insufficient, Mizutori said.

Mizutori said a little less than half of all states had put in place a national strategy for disaster risk reduction – another Sendai target, intended to be met by the end of 2020. She called for stepped-up efforts to craft such plans.

The assessment report warned that failure to act more urgently to manage intertwined risks could slow or even reverse progress towards UN sustainable development goals, which include eradicating poverty and hunger.

To prevent that happening, more investment is needed to avert disasters and protect vulnerable people from their worst effects, said Mizutori.

The Climate Centre’s Van Aalst called for more investment in forecasting systems to work out which people in a country or community would likely be hardest-hit by a weather disaster – and in ways to ensure they get warnings and help ahead of time.

“It’s not something we don’t know how to tackle – it’s just putting our minds to it and doing it,” he said.